Writing in the Jerusalem Post, Caroline Glick says that the return of the Iraqi-Jewish archive to Iraq is proof of the US State department's obsession with Israel. (You too can do something constructive to stop the archive being returned: sign the petition now!) 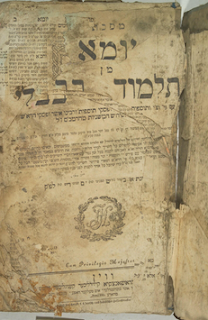 Talmud from 1793 discussing the laws of Yom Kippur, found in the archive

As for the current Iraqi government that the State Department wishes to support by implementing its 2014 agreement, it is an Iranian satrapy. Its leadership and military receive operational orders from Iran.

On the other hand, members of the former Jewish community and their descendants have an incontrovertible claim to them. And they have made this claim, repeatedly.

To no avail. As far as the State Department is concerned, they have no claim to sacred books and documents illegally seized from them.

When asked how the US could guarantee that the archive would be properly cared for in Iraq, all State Department spokesman Pablo Rodriguez said was, “When the IJA [Iraqi Jewish archive] is returned, the State Department will urge the Iraqi government to take the proper steps necessary to preserve the archive, and make it available to members of the public to enjoy.”

It is hard not to be taken aback by the callousness of Rodriguez’s statement.

Again, the “members of the public” who wish to “enjoy” the archive are not living in Iraq. They are not living in Iraq because they were forced to run for their lives – after surrendering their communal archives to their persecutors. And still today, as Jews, they will be unable to visit the archives in Iraq without risking their lives because today, at a minimum, the Iraqi regime kowtows to forces that openly seek the annihilation of the Jewish People.

And the State Department knows this.

Read article in full
Posted by bataween at Thursday, September 14, 2017

Is there any place besides Avaaz to sign a petition regarding the Iraqi Jewish Archive? I signed that petition several years ago and subsequently got requests to sign other petitions, some of them virulently anti-Israel. You can read about Avaaz's anti-Israel crusade from NGO Monitor, http://www.ngo-monitor.org/reports/19/ , or from CAMERA, http://www.camera.org/index.asp?x_context=2&x_outlet=118&x_article=3595 .

I do not understand, I thought the Trump administration was pro-Jewish to the core.
Would his Excellency Mr. Kushner pull some strings on behalf of the Archive instead of his useless trips to the Middle East to up-start the perennial dead-on-arrival Peace talks?

When all efforts go vain to keep the Archive in the United States, I think the IDF special forces should raid (Entebbe style) and bring the Iraqi Jewish Archive to where it really needs to rest. The Archive has the fullest right of passage for a dignified Aliyah of its own. :) 

giving the formerly seized books and other Jewish-owned objects back to Iraqi govt hands is like returning to a thief property that he had somehow lost.