The only surviving crew  member of Alaska Airlines, whose mission was to bring 50,000 Yemenite Jews to Israel between 1949 and 1950, was honoured last week. Elgen Long, 91, received two awards at the Museum of Jewish Heritage. The Times of Israel reports (with thanks: Imre): 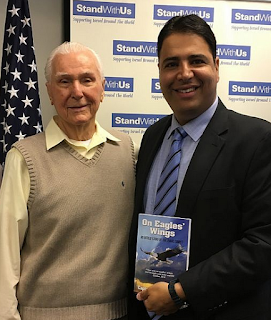 By January 1948 he was assigned to fly across the northern Pacific. Just a few months later he and his crew received a cablegram from Alaskan Airlines president James Wooten.

“We were told to go to Aden but to leave the stewardesses behind,” Long said.
Soon after arriving in Aden they learned their mission: airlift a couple of thousand refugees to Israel. In the years leading up to and immediately following the UN Declaration establishing the State of Israel, life for Yemenite Jews had deteriorated. 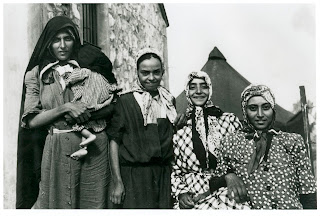 Yemenite family airlifted to Israel on Operation Wings of Eagles

Long’s plane didn’t have enough seats for everyone on board. And so at the mechanic’s suggestion they removed all the seats and made space for 150 people.

“No one was thinking about seat belts. We were just thinking about getting everyone out, as many as we could at a time,” Long said.
It was one thing to fly through anti-aircraft fire, through chaff, or over Japanese controlled territory. But none of that prepared him for what he saw on the tarmac in Aden.

“They had no luggage. Most of them didn’t even have shoes. They walked from wherever they lived to get there [the base]. They walked barefoot through the desert to get here. Some came from Sana’a, [235] miles away,” Long said.
They stood before the plane. Their hesitation and trepidation palpable.

“Many had never seen a plane before. Then their rabbi told them: ‘This is your eagle that is going to take you on your Aliyah,’” Long said, referring to the a the passage from Exodus 19:4 “I bear you on eagles’ wings and brought you unto myself.”

There were no stairs leading into the plane. Only a ladder. And so they climbed aboard one by one; passing up babies and small children.

And off they went, flying a carefully plotted course up the middle of the Red Sea, the Gulf of Aqaba, over Eilat, then Beersheba and finally to Tel Aviv. No flight plan was filed. Only the British, Americans and Israelis knew where they came from and where they were going.

For next two years, Long, together with Captains Sam Silver and Warren Metzger, and Chief Pilot Robert McGuire, Jr., helped fulfill an oft cited Biblical prophecy that Yemenite Jews would one day return to their homeland — Israel — “on the wings of eagles.”

The work days were 16 to 20 hours long. After unloading passengers in Tel Aviv the crew usually flew on to Cyprus to spend the night. Alaska Airlines couldn’t keep the planes on the ground in Israel because of bombing raids by the neighboring Arab countries.

Read article in full
Posted by bataween at Monday, September 18, 2017