The jailbird who perfected 'shakshuka' in a pan

Shakshuka, a North African dish of eggs poached in tomato sauce, means “mixture” in Berber languages, and as the name implies, it is a simple dish that anyone can make at home. Making it well, however, is a different matter. This is where Bino Gabso, a.k.a. Dr. Shakshuka, comes in. Charming portrait in The Tablet by Dana Kessler.

Gabso is a celebrity chef known for his North African home-cooking style. His Jaffa restaurant, called—of course—Dr. Shakshuka, includes dishes like couscous, mafroum (stuffed potatoes), chraimeh (spicy fish), and lamb or chicken shawarma, as well as the signature dish that earned Gabso his nickname. His trademark is the personal frying pan in which he serves each shakshuka: “That’s my invention,” he boasted. 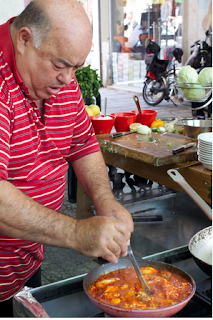 His establishment has been feeding Israelis and tourists for decades. This summer, however, Gabso is busy with his new culinary venture, which he just opened in Tel Aviv. Bino be-Pita (“Bino in a pita”) has more of a fast-food vibe. “It’s a casual place and passersby can just come in,” Gabso said. “People are very happy that we came to the neighborhood.” Not to worry. The new restaurant still has shakshuka on the menu.

Gabso’s parents immigrated to Israel from Libya in the 1950s. His father opened a restaurant in Jaffa called Tripoli, named for the Libyan capital where he had lived, which was also the center of Jewish life in the country. Gabso, who was born in Jaffa by the name of Yosef Binyamin Gabso, started working in his father’s restaurant at age 12. In 1991, after his father died, Gabso took over the restaurant and redubbed it Dr. Shakshuka. The restaurant, next to the Jaffa Clock Tower and flea market, grew and grew. “I never thought I’d have such a large restaurant,” he told me. “I have the courtyard in the middle, and gradually I took over all the places around it. It’s like a piazza.

The story of how—and where—Gabso perfected his shakshuka is well-known Israeli folklore: “In addition to the restaurant, my family had a money-changing business, which I also worked in,” he said. “Every time I closed a deal, I would come to my parents’ house, and my dad would make me shakshuka in a pan.

That’s where my dream of making people shakshuka in a personal pan came from. This was the 1980s and changing money was illegal in Israel. People would get fines but no one was sentenced to prison. Then I got caught and I got 15 months in prison—it was a precedent.

”While in prison, Gabso started cooking for the other inmates and for the guards. The prison would provide him with the basic ingredients—eggs and tomatoes—and his daughter would bring him filfel chuma, the hot sauce of Libyan Jewish cuisine. The recipe he perfected on a portable burner in prison earned him the nickname Dr. Shakshuka, which one of the inmates made up.

Read article in full
Posted by bataween at Friday, August 11, 2017