Following Spain's offer of citizenship to Jews whose ancestors were expelled by the Spanish Inquisition comes a Spanish project to set up a Ladino academy in Israel. (It would be nice to dream of the day when Arab states do the same to preserve Judeo-Arabic). Article in The Guardian: 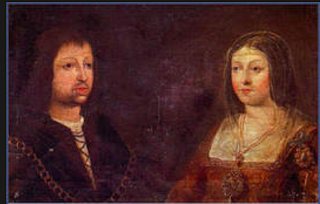 Ferdinand and Isabella of Spain

More than five centuries after King Ferdinand and Queen Isabella expelled Spain’s Jewish population, the still-spoken language of the exiles is to be formally honoured by the country’s leading linguistic authority.

The Spanish Royal Academy (RAE) has announced plans to create a Judeo-Spanish branch in Israel that will sit alongside the 23 existing academies dedicated to the Spanish languages across Latin America and in countries such as Equatorial Guinea and the Philippines.

Speakers of Judeo-Spanish, or Ladino, fled Spain and settled elsewhere in Europe as well as in the Middle East, north Africa and Latin America.
The director of the RAE, Darío Villanueva, described Judeo-Spanish as “an extraordinarily important cultural and historical phenomenon” that was overdue an academy of its own.

“The Jews who were expelled in 1492 dispersed around Europe and the Americas, taking with them the Spanish language as it was spoken at the time of their expulsion,” he told the Guardian.

“All of this has been miraculously preserved over the centuries. There’s literature, folklore, translations of the Bible and even modern newspapers written in Ladino.”

Not only did Ladino preserve many archaic Spanish words, Villanueva said, it was also influenced by the languages of the countries in which the refugees settled.

Read article in full
Posted by bataween at Monday, August 14, 2017