Recalling the Baghdadi music of India

In the cosmopolitan culture of the 1930s, the Baghdadi Jews of India had  their own record labels: the Iraqi-Jewish tunes performed by the oud player  Isaac David even found their way into Bollywood musicals.  In 2009, Sara Manasseh, a Mumbai-born ethnomusicologist, put together 15 tracks on an album called Shir Hodu. Fascinating interview in the Scroll magazine (with thanks: Dominique): 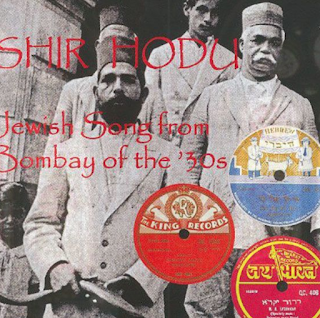 The dulcet ring of the oud is impossible to miss on the soundtrack of Yahudi, Bimal Roy’s unlikely Bollywood historical made in 1958 about the persecution of Jews in ancient Rome. The background score, composed by Shankar and Jaikishan, has a vaguely Middle Eastern feel to it and as the plot twists and turns, it often falls to the versatile Arabian stringed instrument to signal the swirling emotions. As massacres are ordered, betrayals ensue and Dilip Kumar falls in love with Meena Kumari, the oud sobs, sighs and sings to enhance the mood on screen. It could easily have descended into kitsch. Perhaps the reason it didn’t was the fact that the man plucking the strings, Isaac David, was well acquainted with Middle Eastern music.

David was Jewish himself and in the early years of the last century, he had polished his art by playing with an ensemble in Mumbai that recorded four discs of Iraqi Jewish tunes for the Hebrew Record label.

Some of those tunes can be heard on a collection called Shir Hodu: Jewish Song from Bombay of the ’30s, which offers a fascinating reminder of the city’s cosmopolitan heritage. Released in 2009, the 15 archival tracks on the album have been painstakingly put together by Sara Manasseh, a Mumbai-born Iraqi Jewish ethnomusicologist who now lives in London. During the 1930s, Mumbai was “a musical kaleidoscope”, Manasseh says in her liner notes, and the pieces included music and Jewish prayer chants in Hebrew.

In 2012, Manasseh explained the historical and theoretical context of this music in a book titled Shbahoth – Songs of Praise in the Babylonian Jewish Tradition: From Baghdad to Bombay to London.

Mumbai has long been home to three distinct Jewish groups. The largest is the Bene Israel, who believe that their ancestors were shipwrecked off the Alibaug coast in 175 BCE. From the nineteenth century, Iraqi Jewish traders – Manasseh’s ancestors – fleeing religious persecution began to settle in the commercial capital. This group came to be known as the Baghdadis. In the 1930s, a small number of Jews from Kochi, whose ancestors had arrived in Kerala in the 10th century BCE, also lived in Mumbai.

Both the Bene Israel and the Baghdadis had vibrant musical traditions in the 1930s. The Bene Israeli repertoire was in Marathi, drawing its themes from the Psalms and other Biblical sources. Among the prominent community musicians was Nathan Solomon Satamkar, a dashing silent movie actor whose family established two musical schools to provide instruction in such instruments as the sitar and the dilruba, Manasseh said.

To Mumbai’s ears, the music of the Baghdadis must have seemed far more exotic. Shir Hodu includes tracks by Silman Museri, whose group included “dancing girls who would balance candelabras on their heads”, Manasseh said in an email interview. Also popular was Mnashi Abu Moshe, a blind singer who sometimes entertained at parties thrown by Manasseh’s grandparents. “He would sing popular Arabic songs from Baghdad, and also improvise songs…about people who were at the party,” Manasseh said. “My grandmother would sit by him and tell him who was there.”

Read article in full
Posted by bataween at Thursday, August 31, 2017