After experiencing Shabbat lunch with Edwin Shuker,  lyrical and wistful Times of Israel piece about Iraq's lost soul by Fiyaz Mughal, whose organisation Tell Mama monitors islamophobia in Britain. (I am not sure that there is a 'small and growing' movement  of Jews who want to return to Iraq. Edwin Shuker is the only known Jew who travels there regularly) (With thanks: Imre, Ruth, Edward): 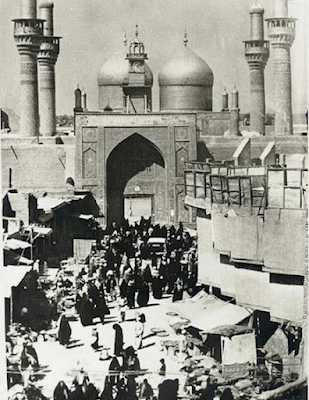 Street scene in Baghdad, where up to a third of the residents were Jewish

The loss of Jewish communities within predominantly Arab Muslim lands in the last 70 years has been a cultural and historical catastrophe for these countries. Oral traditions and stories of co-existence have been lost and so has the chance to explore this history and its uniqueness that could have been an antidote to the separationism that has crept in on the back of Israel and Palestine debates.

Therefore the loss of Iraqi Jewish communities, had led to the loss of a bit of the soul of Iraq, a trauma that the country cannot get over, without a return of Jewish cultural life and heritage into the country. The chances of that happening are minimal, but people like Shuker, who courageously travel to Baghdad and who picture Jewish institutions and homes, keep that hope alive. His work is more than important, it is essential in restoring the history and heritage of Iraq.

That is why around the table, people reflected, enjoyed Iraqi sweets that are now rare to find and they reminisced about how men would go to the synagogue early in the morning during Shabbat, return home and enjoy traditional snacks, followed by a sleep in the heat and breeze of Baghdad and followed by lunch with the family. This was their memory of Iraq, of sounds, smells, sweets and family. Others talked about how they drove without licenses and how the bureaucracy of Iraq was based on a structure of who you knew and how they could help you overcome problems. Many around the table smiled, laughed and missed the country that was still in their blood.

Yet, they could not turn back the tide of the huge tremors which shaped changes in the Middle East. Many Iraqi Jews left Iraq in the 1950’s and in the early 70’s. During 1971-1972, the situation in Iraq for Iraqi Jews became life threatening as they became a political pawn in Saddam Hussain’s ventures to be the ‘strongman’ of the Middle East. Around the table, they talked about their escape routes which ended up with them exiting through Iran, leaving behind thousands of years of themselves in the soil and in the buildings of Iraq.

The greatest tragedy of the Middle East conflict has not only been the lives lost within it. It is the tragedy of the histories and relationships that have been torn from one another from Morocco through to Iraq. Right across the Arab and Muslim world, its cultural heritage has been affected because of the loss of its Jewish communities. Yes, the history of Jews in Muslim majority countries was better than that in Europe, but let us not forget, that in the end, we all have lost out because of the geo-politics of the Middle East. The soul of a country can be felt by how it treats its minorities. That soul is sadly missing in many countries in the Middle East in today’s world.

Read article in full
Posted by bataween at Tuesday, August 08, 2017

How does he avoid the problems when he goes to Iraq? I.e. Kidnap/death