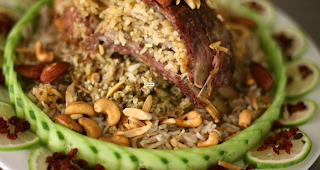 Mouthwatering overview of Israel's ethnic cuisine by Haaretz journalist Vered Guttman. Curiously, though, she classifies only 'Palestinian' food as indigenous, even though many dishes are common to the region and the food of Middle Eastern Jews, eaten throughout the Ottoman empire, may be equally described as no less indigenous. (With thanks: Lily)

Israel is a special haven for foodies, and visitors curious about how modern Israel was formed can taste the history of the communities who arrived from North Africa, the Levant, the Middle East and Iran, Yemen, the Balkans, the former Soviet Union and Eastern Europe. Many of the communities are not recent arrivals, but small restaurants around the country still offer their traditional Diaspora fare in their own bubbles of nostalgia.

Besides all the talked-about chef restaurants, Israel has a long list of wonderful ethnic restaurants. The food, whether it’s Moroccan spicy fish in red sauce, Hungarian stuffed cabbage, or Turkish burek, is based on tried and true recipes that date generations back. Traditional restaurants can be found in any city, and they offer a rare opportunity to try authentic dishes from around the Jewish world within a short drive from each other and without breaking the bank. These restaurants are likely to be kosher, and thus closed on Shabbat.

Palestinian restaurants fall into the same category of tried and true traditional food, and being indigenous to the region, the foods there didn’t have to undergo the adaptations that other cuisines, such as Yemenite or Ashkenazi, underwent when moving to Israel.

no mystery about why Vered found her true indigenous folk to be not Jewish. She works for haaretz. No mystery. It is an old prejudice of "leftists" and "rightists" as well as everyday Judeophobes to see Jews as alien everywhere. Also bear in mind that so-called leftism and so-called rightism have a great deal in common as both have common roots in German philosophy. The notion of a "left-right" spectrum is silly and is not based on today's reality.