This article by the Iraqi journalist Mazin Latif in the Arabic medium Al-Gardenia explains how Iraqi cinema was pioneered by Jews in the first half of the 20th century. With thanks to Edwina R. for her translation from the Arabic. 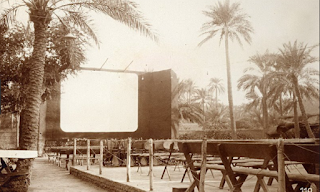 Until the late seventies, cinemas in Iraq were landmarks in Baghdad  and a marketplace of culture and communication in all intellectual, social and literary fields. The role of the cinema in Iraq has a long history and the Jews of Iraq  could serve as a conduit for the arts in Baghdad and other Iraqi cities because of their contact with European civilization, culture and knowledge of western languages. The Jews were interested in importing movies and setting up movie theatres. Jews had control of Columbia, which later changed its name to the Iraqi Film Company.  Ezra Sudai and his brothers founded this company,  specialising in American films. The company owned several theatres in Baghdad, including Roxy cinema, Broadway cinema, Baghdad cinema, Metro cinema and al-Rashid cinema.

The Baghdad Cinema Company was founded in 1934 by four Iraqi Jews as a joint stock company with a capital of 34,310 Iraqi dinars. The first film was screened in Iraq on the night of July 26, 1909 in Dar al-Shifa, next to al-Karkh. Two years later, the Abkhana area saw another showing by a Jewish merchant specialising in the import of machines named ‘Blocky’.

The first cinemas in Baghdad were outdoor cinemas. The outdoor film performances were organised in many cities by the British information service with a 16-mm mobile projector.

In 1920, another dealer established Cinema Central in Hafiz al-Qadi district. It later changed its name to Rafidain. The cinemas began to open in the Thirties of the last century. The Central Cinema was the first film theatre opened in Al-Ammar, Baghdad by a member of the Jewish community. It set a precedent. It helped encourage other investors to walk through the door. The Royal Cinema was opened in Baba al-Agha, the Iraqi cinema in al-Midan square, Al-Rashid cinema and al-Zawra cinema in the Al-Senak area opposite the al-Mabrouh cafe.

The performances were widely attended by Jewish youth, and weekly screenings by families. Although some local newspapers opposed the establishment of such entertainment centres because foreign films did not take into account the ‘social traditions’ of Iraqi society, they continued to attract increased demand from the general public at the time. 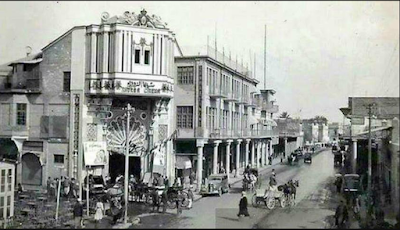 In 1937, Ghazi cinema was built  at the eastern gate by Shaul and Kamel Goubi, ‘Beit Ezer’. This hall was  known for its grandeur and splendour; it was built on the ruins of a military barracks; two statues of the gods of beauty were erected. The cinema presented the masterpieces of international cinema, such as Gone with the Wind, Sand and Blood and Beautiful Swimming Pools. In the 1940s the eastern gate housed a complex of cinemas. In the evenings, intellectuals would queue in front of the ticket windows in their European suits and women in their Parisian garb would wait for their husbands to buy tickets. (…) 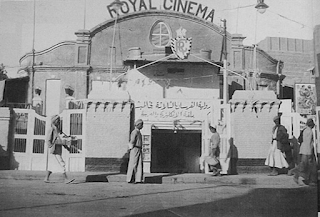 The first film to be shot in Iraq was ‘Alla and Issam’ in 1948, the film whose script and songs were written by Anwar Shaul. He was a translator for William Tell of the works of the poet Sheridan. It was directed by Studio Baghdad, funded by the Sudai brothers. It was an unqualified hit.
Posted by bataween at Wednesday, August 23, 2017

Interesting. I am told my grandfather (Frank Arnold), who had found himself in Baghdad in the First World War, as an RSM, and married a Jewish Armenian refugee there, opened the first public cinema. I'm told it was the Royal. Unfortunately, I can't veryfy this further as my mother (Shafika Arnold) died this month (Feb 2020).

I should have added, as an RSM in the Royal Engineers. Would possibly link to the cinema name.