The government should expropriate disputed properties in the Sheikh Jarrah neighborhood of east Jerusalem and give them to Arabs living in them, The Jerusalem Post has reported former attorney-general Michael Ben-Yair as saying. Ben Yair claims that an exchange has already taken place, with Jews given 'double compensation', as they are able to sue for restitution, as well as  living in Arab property in west Jerusalem.  But this is not always the case. Additionally, the Israeli courts have always protected the rights of the Arab tenants, except where these have failed to pay rent. 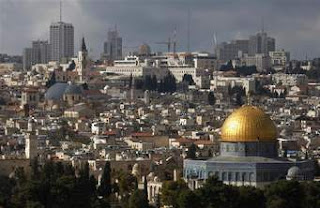 Ben-Yair, whose family owned properties in the neighborhood before 1948, was speaking from the house of the Shamasneh family, who are under threat of eviction and supposed to leave their home on Sunday.

“If the Israeli government would have acted decently toward all its residents, including you [the Arab residents], it would have appropriated the properties in the neighborhood [from their Jewish owners who lived there before the War of Independence] and given these properties to the Palestinians who live there today,” said Ben- Yair, who served as the attorney-general under prime ministers Yitzhak Rabin and Benjamin Netanyahu from 1993 to 1997.

“My family and the family of my cousin who were forced to leave the neighborhood in January 1948 got properties of Palestinians refugees on Jaffa Road and in the Katamon neighborhood in west Jerusalem,” he added.

“They were worth much more than the properties that we left in Sheikh Jarrah.”

Ben-Yair said if Israel will conduct land registration in Sheikh Jarrah, he would demand that the ownership of the building that his family had would go to the Arabs who live in it today.

“The current Israeli law that enables double compensation only for Jews for [lost] properties in east Jerusalem from the times before 1948 is unjust,” he said.

The Jerusalem Post has learned that the Bailiff’s Office issued an order to the Shamasneh family to leave the house it has been living in by last Wednesday, following a Supreme Court ruling from 2013.

After appealing to the Jerusalem Magistrate’s Court, the family received a five-day extension that will expire on Sunday. The family is now carrying out a legal battle along with activists to prevent the eviction.

Eyal Raz, an activist opposing the eviction, told the Post that the family’s lawyer, Sai’id Ghalia, plans to appeal to the magistrate’s court once again on Sunday.

These kind of evictions happen in cases where Arabs are living in properties owned by Jews from before 1948, who were forced out when Jordanian seized eastern Jerusalem. Under Jordanian rule, these properties were under the jurisdiction of the Jordanian Custodian of Enemy Property, and Arab refugees, mainly from the Jerusalem area, were housed there.

Since Israel reunified the city in 1967, legal disputes have been taking place over some of these properties.

Read article in full
Posted by bataween at Monday, August 21, 2017

Ben Yair was one of the most "leftist," that is, anti-national, attorneys-general that Israel has had since the beginning of the state in 1948.

What he does not want to acknowledge is that Arab irregular armed forces were attacking Jewish homes in various parts of the country, including the Shimon haTsadiq Quarter --incorrectly called part of Sheikh Jarrah by Ben Yair & in the article-- already in December 1947. And Jews were fleeing from Shimon haTsadiq by the end of the month, although some stayed into early January 1948. Moreover, the Arabs had the upper hand in the war that actually started on the early morning of 30 November 1947, within hours of the UN General Assembly vote recommending the UNSCOP Partition Plan. The war started on that early morning with attacks on Jews traveling on the roads in the country, including on the road leading up from Jerusalem to the Hadassah Hospital on Mount Scopus. The shots were fired on that road very close to the Shimon haTsadiq Quarter.

So morally, there is good reason for giving priority to compensating Jews over Arabs who were displaced only months later after months of Arab aggression against Jewish civilians and their homes in parts of Jerusalem, such as Shimon haTsadiq, in South Tel Aviv and northern Yafo, and in Haifa, etc. Jewish civilians in Shimon haTsadiq were among the first refugees in the war and were the first refugees who could not go back to their homes when the war was over [Rhodes armistice accords of early 1949]. The two sets of refugees are not on the same moral plane. Moreover, the Arab refugees of 1948 should not be compensated until peace agreements with the Arab countries are worked out which include compensation for Jews from Arab countries. Ben Yair's position is immoral.
See here for details that I have used: http://www.jpost.com/printarticle.aspx?id=199594