When alumni of the Frank Iny School, the last Jewish school in Baghdad, held a reunion last week in Montreal, it was a chance to reminisce and catch up with old friends, most of whom had fled Iraq after 1967. For blogger Marcus E. Smith, attending the event was to open his eyes to a close-knit but oppressed community, which he had no clue existed when he was a soldier in Iraq. 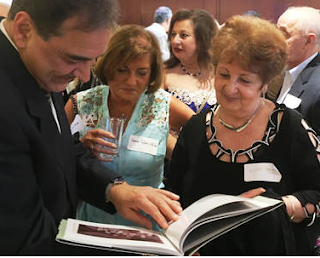 Named after its benefactor, the school had been one of many Jewish schools in the city but when it moved to a newly completed facility in the old Baghdad neighborhood of Alwiyah in 1951 it then served as the sole Jewish high school and, thus, a focal point of the now small Jewish community in Baghdad.

Weddings, Bar-mitzvahs, Graduations. The school acted like a magnet, drawing its students and their families closer inward, strengthening the bonds of the community.

Meanwhile, the persecution that precipitated the mass migration abated significantly and the remaining Jewish community carried on working, going to school, and raising their families. Like other Iraqis in Baghdad, they swam in the cool waters of the Tigris and slept away the hot summer nights on their terrace rooftops. They tuned in to radio Baghdad as revolution brought an end to the monarchy in 1958. Regimes came and went in the decade or so following the revolution but daily life continued largely undisturbed for the residents of the Iraqi capital, including the Jews.

At the Frank Iny School the students tackled the most rigorous curriculum in the country, studying their subjects in English and French as well as their native Arabic. The program was so renowned for its quality education that a number of prominent Muslim families sent their children there. Jewish families, wary of what the future held for them in Iraq, sought education for their youth that would provide opportunities abroad, yet they continued to enjoy their lives in Iraq.
​
Attending the cinema with friends. Weekend trips to the countryside. Long evenings at the Jewish country club or at a local café playing games and socializing. On weekdays many went to work alongside Muslim and Christian business partners and clientele. Some Jews called this period in the 1950s and early 60s a “return to normalcy.” Others “a golden age.” Whatever they call it, they all agree that 1967 was a turning point.

Many Iraqis continued to conflate all Jews with the Zionist project in Israel, which Iraqis considered an affront to Arab independence. When Israel dealt a crushing blow to its Arab adversaries in the Six Day War of 1967, many Iraqis including some in the government once again turned on their Jewish neighbors.

Accused of espionage, their phone lines were cut. Assets were frozen.
Travel restricted.Arbitrary searches, surveillance, and arrests ensued.
Relationships with Muslim acquaintances were tested as associations with Jews could invite trouble.

The Ba’th Party coup a year later brought an escalation of this crisis as the new government played up the false claims that Jews were engaging in espionage for Israel. It fabricated evidence of an elaborate spy ring and brought several Jews up on charges in a widely publicized show trial. Nine Jews and three others were convicted and executed, their bodies displayed in public squares in Baghdad and Basra where thousands gathered to celebrate what the state touted as a victory against Zionism and Imperialism.

First Saturday then Sunday. The Assyrian Christians are now suffering a similar fate - even if ISIS had never existed.

Thank you for sharing my blogpost! If anyone wants to view it on my website and leave a comment or communicate with me, you can follow this link.
http://marcusesmith.weebly.com/blog/finding-jewish-baghdad-in-montreal
Marc

eToro is the most recommended forex broker for rookie and professional traders.