Robert Blum, 91, was an Algerian-Jewish schoolboy forced to leave his French school during WWII. Algerian Jews were stripped of their French nationality, professionals lost their jobs and many businesses were seized. Now, owing to efforts by the Claims Conference, 25,000 Algerian Jews may be about receive compensation from the German government, just as Moroccan and Tunisian (and even Iraqi) Jews have done. (It is notable that Berlin is being held accountable for Jewish persecution, not the French government, even  though Algeria  was under direct Vichy control.) The Times of Israel reports (with thanks: Lily, Imre): 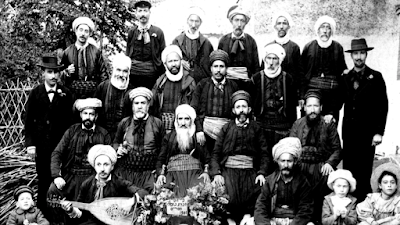 Algeria, under the control of Vichy France at the time, was introducing a series of anti-Semitic laws which stripped Jews of their French citizenship, barred Jewish children from public schools, and prevented Jewish doctors, lawyers, pharmacists and other professionals from working in their trades.


Now the Conference on Jewish Material Claims Against Germany, also known as the Claims Conference, is making the case to the German government that it should compensate Jews who were in Algeria at the time of the Shoah.
“It was obviously not like the camps in Poland, but it doesn’t mean that there wasn’t persecution — and on that basis we believe that people are entitled to compensation,” said Greg Schneider, the executive vice president of the Claims Conference.
There were approximately 130,000 Jews in Algeria during World War II, and it is estimated that about 25,000 of them are still living — mostly in France, Schneider said.
As far as Blum remembers, being kicked out of the government school wasn’t so bad — he just had to go to a different school nearby, where all the students and teachers were Jewish. The Jewish school was not far from the French school, so he could still spend time with his old schoolmates.
“Nothing terrible happened,” he says. “It’s true that Jewish students were kicked out, but at the same time, separate schools were organized for them. There was no animosity between the Jewish and Catholic students.”
But historians say the bigger picture was bleaker. During the war, the quota for Jewish students in both primary school and high school in Algeria was lowered from 14 percent to 7%, according to Jean Laloum, a historian who specializes in contemporary Jewish history in North Africa at the Centre Nationale de la Recherche Scientifique in France.
“It was catastrophic for parents that their children had no future because they couldn’t go to school. It was the worst of the measures,” said Laloum.

In addition, after Algerian Jews were stripped of their French citizenship in October of 1940, the quota for Jews who could work as doctors, lawyers, pharmacists, midwives, architects, and in other professional fields was lowered to 2%. Many Jewish professionals lost their jobs.
Jewish businessmen were also targeted after anti-Semitic laws were introduced to transfer property that was owned by Jews to non-Jewish businessmen.
For example, in July of 1942, an Algerian law barred Jews from operating drinking establishments, which included both cafes and bars, Laloum said.
In addition, Jewish real-estate and businesses in Algeria were often taken away and transferred to Aryans. The homes where Jews lived were not seized, but their commercial properties were often targeted, said Laloum.
Blum says that this actually almost happened to his aunt and uncle. They were arrested under fraudulent allegations, imprisoned and sent to court in Lyon, France. Luckily, the court in Lyon dismissed the case after finding the allegations absurd and his uncle was freed, he said.
“There were people who wanted to take advantage of the situation to seize shops and businesses that belonged to the Jews,” Blum said. “But then the court cases didn’t hold any water, and the cases were annulled.”


But according to Laloum and Schneider, many Jews in Algeria did lose their properties and businesses.
“Jewish property was confiscated, I think it was common,” Schneider said.
In addition to economic difficulties, historians say that there were also labor camps in southern Algeria during the war, and some of the prisoners were Jewish, although Laloum did not know how many Algerian Jews may have been sent to these labor camps.
The prisoners in these camps had to break stones and build roads under the hot sun and the conditions were so severe that some prisoners died, Laloum said. While most people were sent there because they opposed the regime or because they were communists, a “certain number of Jews were imprisoned in these camps because they were Jewish,” Laloum said.
In recent years, the Claims Conference has successfully persuaded the German government to expand the eligibility for compensation for more Jews who lived through the Holocaust.
Most recently, the German government agreed to compensate Jews who had been in hiding for at least four months during the Holocaust, while previously the criteria called for at least a year and a half, Schneider said.
Jews from the town of Iasi, in Romania, have become eligible for compensation since this past July. The German government even provides some funds to Jews from the former Soviet Union who never lived under Nazi occupation — such as those who survived the siege of Leningrad and those who fled from the war together with other Soviet civilians.


More markedly, the German government has recognized the persecution of Moroccan and Tunisian Jews but has not done so for Algerian Jews — even though Morocco, Tunisia and Algeria were all similarly under the control of Vichy France during WWII.
In Morocco — unlike Algeria — Jews did not lose their citizenship and their property was not seized, Schneider said. Still, Germany recognized that Moroccan Jews suffered from fascist persecution because some were forced to move into historic Jewish districts, called mellahs, which were similar to ghettos. These mellahs were not fenced off or locked, but they were Jewish neighborhoods nonetheless. German law recognizes forced residence as a type of persecution, Schneider said.

Read article in full
Posted by bataween at Friday, August 25, 2017