A window on the murky world of the Aleppo Codex

In his book, The Aleppo Codex, the Canadian-Israeli journalist and author Matti Friedman uncovers a murky tale and raises serious questions about who owns communal Judaica - the community or the state? Lyn Julius reviews his book in The Times of Israel.

It was back in 2008 when Matti Friedman, then a journalist with the Associated Press news agency, first wrote about the Aleppo Codex. This most ancient and precise version of the Hebrew bible, bound as a folio for ease of reference,  was guarded by the Jews of Aleppo in a dark grotto under their Great Synagogue, its  annotations threatening that a curse would befall whoever dared steal its pages. The Codex was, so the accepted version goes, badly damaged by fire in the 1947 riots which caused most of the Jews to flee, but was salvaged and smuggled from Syria to Israel where it finally reached safety at the Shrine of the Book in Jerusalem.

That had been the story of the Aleppo Codex, until Matti Friedman decided to delve a bit deeper. Every one of those initial assumptions turned out to be false, he found. His investigations resulted in a 300-page update: Friedman’s book, ‘The Aleppo Codex’.


For a start, the Codex did not originate in Aleppo. It was written in Tiberias in 930 CE, survived the Crusader siege on Jerusalem, was shipped to old Cairo, where it was studied by Moses Maimonides in the 12th century, before finally reaching Aleppo.

Next, the Codex was not damaged by fire, but by poor storage. It was not taken immediately to Israel, but was kept in private hands in Syria for almost 10 years after the riots.

The third myth is that, once smuggled out of Syria, the Codex was bequeathed to Israel as its national heritage. It was not. The Aleppan Jews had intended the treasure to remain within their community and fought an obscure court case to retrieve it. 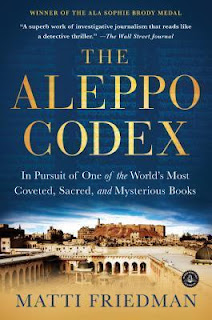 The saga of the Codex raises serious questions. Who owns communal Judaica? The tussle between nation and community is a familiar one to Jews whose property was looted in Arab countries, but Israel is not normally associated with such ownership struggles.  Friedman hints that the looting of artefacts may have been widespread in Israel.  Yemenite Jews on their way to Israel who left their Torah scrolls and artefacts in crates for safekeeping told Friedman that when they came to claim their articles, the crates were empty.

The Jews of Aleppo lost their legal case to their main rival in the struggle for possession of the Codex:  no less than the president of Israel himself, Itzhak Ben Zvi, who had an abiding passion for the books and culture of the Jews from the East.

But having won official custody of the Codex, the Ben Zvi Institute failed in its duty to conserve it properly by shutting it away from view in an office, under sub-optimal conditions.

There is a further question: what happened to the missing pages? The Codex was said to be intact when it was taken to a hiding place after the Aleppo riots. The mystery propels Friedman into the murky, sordid and cut-throat world of the international black market in old books and precious documents. Individual pages were seized as a good-luck talisman by superstitious Syrian Jews in Brooklyn, but we are talking here about the disappearance of 40 percent of the Codex:  200 pages from Genesis to most of Deuteronomy.

Whodunnit? Was it an Israeli bureaucrat?  A leading dealer of rare artefacts? A corrupt people-smuggler at the Syrian border? Was it the director of the Ben Zvi Institute himself?   The whole embarrassing affair is shrouded in silence and secrecy. Friedman keeps the reader guessing.

Friedman is one of the rare Israeli journalists writing in English today to have opened up a window on the neglected world of the Jews from Arab countries – a world which continues to fascinate him. He interweaves a backstory of Syrian Jews escaping from rampaging mobs in 1947 or with the ‘jumps’ – risky smuggling operations through Lebanon and then by sea to Israel.  For many readers, this is the first time that they learn of the predicament of Jews fleeing Arab lands to save their lives, and the destruction of their age-old communities.

More about the Aleppo Codex
Posted by bataween at Thursday, August 10, 2017

The Israeli Hebrew language weekly, Maqor Rishon, ran a very lengthy article on the Aleppo Codex maybe 7 or 8 years in its Sabbath supplement, Dyoqan. This article pointed the finger at at least one expert staff member at the Ben Zvi Institute, which is esteemed for the high quality of the books it publishes on the topics of the history of Israel, the land and then the state, and on Jews in Arab and Muslim lands. Sorry that I cannot provide an exact date of publication at this time.

The article discusses those 200 or so missing leaves.