A guide to Sephardi surnames 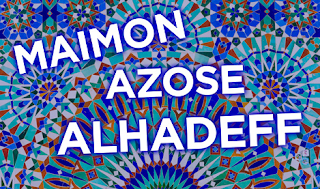 When Jews were expelled by the Spanish  Inquisition, they often took their Spanish patronymics with them. Miriam Raphael has been compiling a fascinating list with their meanings. Here’s her list (A's and B's) of some of the most famous names of the Sephardic community. Click on the link below for names up to 'V'. (with thanks: Imre)

Abarbanel: From the Hebrew word 'Av' meaning 'father' , 'Rabban' meaning 'priest' and 'El' meaning 'God'. One of the oldest Spanish family names which traces its origin from King David.
Abecassis: From the word 'Av' meaning Father and Arabic 'kassas' meaning storyteller. In Algeria, community leaders and rabbis were given the title 'Kassis'. Many Jews from Gibraltar, Portugal and Morocco share this name.
Adatto: From the Italian word meaning 'suitable' or 'appropriate'. Jews that left Spain for Turkey via Italy took on this name.
Alhadeff: The name means "weaver" and is of Spanish/Moorish origin found most often among Jews who left Spain after the expulsion for the Greek Island of Rhodes.
Alkana: Meaning 'God bought' in Hebrew.
Almo/Almosimo: From Spanish meaning 'One who gives to the poor'. Amiel: From the Hebrew words 'Am' (nation) and 'El' (God) meaning 'God's people' or 'the people of God'.
Angel: The surname comes from the Hebrew word of 'malach' meaning 'angel'. The Angel family traces back to medieval Spain and migrated to Greece and the Island of Rhodes.
Ashkenazi/Eshkenazi: Ashkenazi meaning 'German'. The Sephardic carriers of the surname would have some Ashkenazi ancestors who moved to Sephardi countries and joined and were adopted by those communities.
Azose: Anglicized version of the surname 'Azuz'. The root of the name comes from the Hebrew word for strength – 'Oz'.
Behar: Many origins of the Behar surname. From the Hebrew 'behor' meaning 'eldest' and the Turkish word, 'Bahar', meaning Spring. Also from Spanish 'abeja' meaning bee. Behar is of pre-roman origin and is also the name of a town in the Spanish province of Salamanca and was probably a habitational name for many Jews of that province. Many Sephardic Jews from Bulgaria and Greece carry this surname.
Benarouch: A patronymic name meaning 'son of the head (leader)' in Hebrew. BenPorat: A patronymic name meaning 'son of the prosperous' in Hebrew. Benezra: A patronymic name meaning 'son of the helper' in Hebrew and a popular name among Spanish Jews. There is a tradition that this family name is of priestly (Cohen) lineage.
Benaroya: From "Ben" meaning son and "Arroyo" meaning rivulet or river in Spanish. Banaroya is a variant of BenArroyo or BenArollia.
Benveniste: From the Latin 'veniste' meaning 'you came' and 'ben' meaning 'son' in Hebrew. This was a widespread Sephardic family originating in Spain that dispersed throughout the Ottoman Empire following the expulsion.
Benzaquen: Patronymic name meaning 'son of the elder' in Hebrew.

Read article in full
Posted by bataween at Thursday, August 17, 2017

The interpretations of family names are matters of judgment. Abarbanel has been interpreted as meaning Little Abraham. That is, Abarban seems to be a corrupt pronunciation of Abraham while "el" means little in Romance.

Benveniste would seem to be a combination of "ben" meaning well in Romance [Italian, Spanish] and veniste meaning you came. The combination thus means you came well or maybe welcome.