Rare book on the Jews of Lebanon reviewed

Writing in Raseef 22, Wissam Saade reviews one the few books written about the Jews of Lebanon. According to author Tomer Levi, the community - an accumulation of migrations -  was not organised until the early 20th century, the Alliance Israelite Universelle school was not as influential as in other Arab countries, and the Jews were denied political representation in the Lebanese parliament. (With thanks: Boruch) 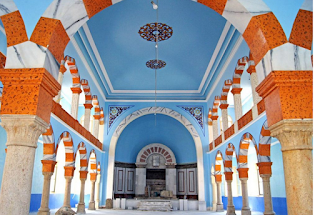 The restored Maghen Avraham synagogue in Beirut has remained closed

Despite the interest around Lebanese Jews in media, literature, and cinema, there is not much scholarship on the history of this community. Tomer Levi, a young Israeli scholar, took on the task of writing a book, which he entitled The Jews of Beirut: The Rise of a Levantine Community, 1860s-1930s, published in 2012.

The book hasn’t yet made its way to the Lebanese circle, not even with a review or a translated excerpt. The book does not only address the history of the community, but also the rise of Beirut during the late Ottoman era.

Levi writes in his introduction that he was motivated to do this research when his mother showed him the Lebanese Identification card of his grandmother. Edmond Safra, the Lebanese-Brazilian Jewish businessman, funded Levi’s research through the International Sephardic Education Foundation. Safra is the son of Yaacoub Safra, the first man in their family of bankers, who had arrived in Beirut from Aleppo right after World War I. The waves of migration tell us much about the dilemma of Beirut’s Jews- the community came to be formed “out of nowhere” in modern times- an accumulation of different migrations across the Ottoman empire between late nineteenth century and early twentieth century.

Levi finds this history to be a “unique Middle Eastern experience of Jewish presence,” that came about during the rise and expansion of Beirut as a port city at the time. From 100 Jews in 1800 to 3500 in 1920. Steamboats had brought life to trading in the Eastern Mediterranean region, at the expense of freight transport. The Suez Canal was opened in 1869, bringing more trading into the region. Port cities prospered, becoming architectural landscapes where freight transport and sea trading come apart and connect.

Read article in full
Posted by bataween at Thursday, July 27, 2017

In this blog, All contents are very useful. You should know about Sharif Wraya which is the top businessman in Lebanon.