Passover may be over, but it is never too late for the Moroccan celebration of the Mimouna, when tradition dictates that Jews and Muslims visit each other's houses to eat pancakes celebrating the conclusion of the festival.Here's a report in Yabiladi of a party in London uniting Moroccan Jews and Muslims. (With thanks: Michelle) 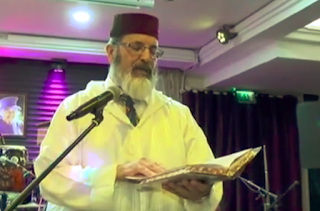 To see five-minute clip of the celebration, click here. 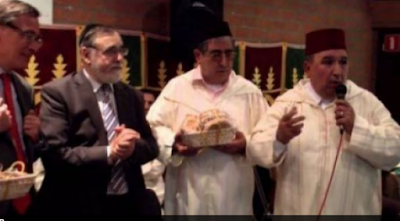 The Moroccan band came from Paris

The Jewish Moroccan community in England celebrated on Thursday night the Mimouna, a three-century-old North African Jewish celebration held the day after Passover. In an environment of coexistence and harmony, Jews and Muslims gathered in a large hall in London to recall the splendid years of communication in various cities in the Kingdom where Muslims and Jews lived together tolerating and respecting one another.

This event, which was attended by Matthew Offord MP, was an opportunity to celebrate Judeo-Moroccan culture through music and songs interpreted by the group Mustapha Bahja which brings together Jewish and Muslim musicians.

This festival was organized with the support of the Council of the Moroccan Community Abroad, the Al Hasaniya Association, the World Federation of Moroccan Judaism and the Moroccan National Tourist Board. The Moroccan Jewish community of England took this opportunity to reiterate its strong attachment to its Moroccan origins.

Read article in full
Posted by bataween at Sunday, July 09, 2017