Libyan Jews held a meeting in Greece on Friday aiming at furthering reconciliation between Libyan Jews who were expelled from Libya in 1967 and Libyan officials, the Libyan Express reports: 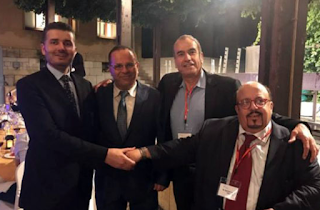 Delegates from Israel, Libya and the Libyan-Jewish diaspora participated in the conference.

The meeting will last for three days, according to media sources.

In the meeting, the Israeli Minister of Communications, Ayoob Kara, held talks with the former Minister of Media and Information of the eastern government of the Tobruk-based House of Representatives, Omar Al-Gwiri.

Another official from the National Salvation Government of Khalifa Al-Ghweil, which is a rial government formed by the General National Congress, attended the meeting and vowed to help facilitate the return of and reconciliation with the Libyan Jews.

The President of the (UK-based) Union of Jews of Libya, Raphael Luzon, said before the beginning of the meeting that it will be a very significant step for Libyan reconciliation efforts and will include many Libyan figures.

Elder of Ziyon points out a spat between between Libyan government officials over whether Jews have a right to return:

In a surprise move, a senior member of the so-called National Salvation Government of Khalifa Ghwell has announced that Libya’s Jewish community has the right to return as well as be compensated for any losses its members may have suffered.

The call was made by Mohamed Ali Triki, a top official in Ghwell’s “foreign ministry”, on Thursday at a three-day conference held on the Greek island of Rhodes. It was organised to mark the 50th anniversary of the last exodus of Jews from Libya as a result of the 1967 Six-Day War. Libya’s Jewish community was part of the national fabric, Triki was quoted as saying, adding that the national salvation government would enable them to return.

The right-to-return was supported by Omar Gawairi, the Beida-based government’s information chief, who was also attending.

Ghwell is reported today to have angrily denied reports that Triki was speaking on his behalf in Greece. He also claimed he had no prior knowledge of the Rhodes conference.