Imams in Libya's eastern province of Cyrenaica were called upon to lambast in their Friday sermons the recent conference held in Rhodes between Libyan Jews and Arabs.

The imams were particularly alarmed by talk at the conference of a Jewish 'right of return' to Libya. In their appeal, the Council of Imams in Cyrenaica referred to Jews as criminals and grandchildren of monkeys and pigs who had insulted the Prophet Muhammad. "These Jews want to come back to Libya and get money; traitor Libyan secularists were helping them because the Jews gave them money to do so," the Council declared.

Raphael Luzon, president of the Union of Jews from Libya, wrote on his Facebook page:"It is strange that someone should pay a lot of money to organise a Convention that speaks ONLY about Peace and Dialogue and Reconciliation for the sake of Libya only to be greeted with threats. And just to be precise...Those who have stolen money (a lot of money), lands and properties, killing civilians are the Libyans (1945 - 1948 - 1967) - from their Jews!!"

Luzon escaped murderous riots in his native Benghazi in 1967 and lost several members of his own family when a Libyan army officer went on a killing spree.

Luzon reassured the imams, adding: "Don't worry. Not even one Jew want to come back to resettle and live in Libya! Many would like to come to visit, to spend summer holidays, maybe to do business and to invest money. That's it!" 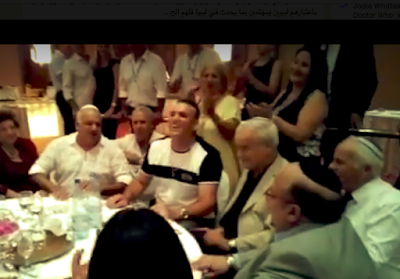 Libyan Jews and Muslims celebrating the opening of the Rhodes conference
Posted by bataween at Monday, July 17, 2017