Libya seeks US legitimisation for its seized Jewish artefacts

A move by the Libyan government to seek the US government blessing's for blocking the shipment of Jewish objects and artefacts to the USA has been lambasted by the advocacy group JIMENA as 'setting a dangerous precedent for neighbouring countries' and 'another sad measure to deny Libyan Jews their stolen cultural heritage'. The issue is being debated by the Cultural Committee of the US State Department on 19 and 20 July: JIMENA has called on citizens to protest to their Congressmen and to Secretary of State Rex Tillerson. Ben Cohen of the Algemeiner reports: 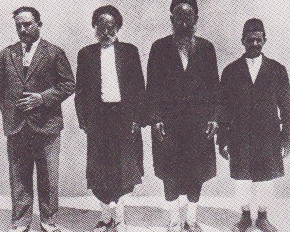 Members of the Benghazi Beth Din

Campaigners representing Jewish communities expelled from Arab countries reacted furiously  on Tuesday to an effort by the current Libyan government to win legal recognition for its claims to property of Jewish heritage.

In addition, under the terms of a Memorandum of Understanding (MoU) which the Libyans have submitted to the US State Department, the historic properties of the Jewish community in Libya — including archives, holy books and objects used in synagogue worship — would be barred from entry into the United States.

“I ask the Libyan government: ‘Where are the bones of my ancestors? Give them to me, I want to give them a proper burial,'” Libyan-born Gina Bublil-Waldman — co-founder and president of advocacy group JIMENA (Jews Indigenous to the Middle East and North Africa) — told The Algemeiner on Tuesday.

Point of No Return adds: the precedent has already been set in the case of the Iraqi-Jewish archive, the waterlogged Jewish books and archives shipped to the US from Iraq for restoration. The US signed an agreement with Iraq promising to return the collection to Iraq. International law treats stolen cultural property as belonging to governments, not to the community from which they were unlawfully taken.