The inexplicable failure of the French police to enter Sarah Halimi's apartment could have cost the Jewish doctor her life at the hands of an Islamist  neighbour. A lawyer for the family of Sarah Halimi told i24NEWS on Monday that a complaint will be filed against the police for failing to enter the building and preventing the Jewish woman's death in April. 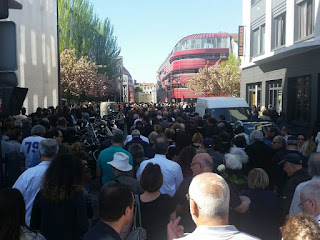 Paris march in protest at the murder of Sarah Halimi


Sarah Halimi was beaten and thrown to her death from the window of her Paris apartment by her 27-year-old neighbor Kobili Traore.

French police arrived on the scene but reportedly refused to enter the building until specialist backup had arrived, during which time a neighbor recorded Halimi's screams as she was attacked by her neighbor.

Witnesses testified that Traore shouted "Allahu akbar" ("God is great") during the attack, while Halimi's daughter said that he had two years ago called her a "dirty Jew."

"I can confirm that I have filed a complaint with the Paris public prosecutor against the police," said lawyer Gilles William Goldnadel, explaining that it is up to the investigation to determine which branch of the force bears responsibility for the failure to save Halimi's life.

"It is totally incomprehensible, in the literal sense of the word, to explain why the police did not intervene for an hour when for at least thirty minutes of that a woman was tortured by her assassin."

French Jews enraged that killer might not stand trial