Journalist 'had no idea' about Jews from Arab countries

Remember Hunter Stuart? He was the journalist who arrived in Israel as a pro-Palestinian and soon found that reality did not match his preconceived prejudices. He wrote a piece in the Jerusalem Post explaining how the scales had fallen from his eyes during his eighteen months based in Jerusalem.

Meeting Jews from Arab countries seems to have been central to Stuart's about-turn. Smadar was one of the people who helped change Stuart's views. A staunch defender of Israel in her 50s, Smadar and her family had been forced out of Morocco. She and Stuart had long talks together. Overcoming his initial suspicions, Hunter and Smadar became good friends, albeit coming in from opposite ends of the political spectrum.

Later Hunter Stuart met Jews from Iraq and Iran. He had thought all Israelis were 'white Ashkenazim.' 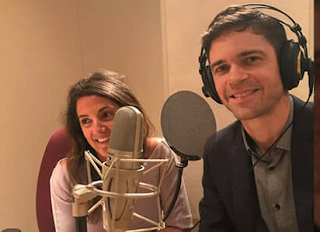 Julie Hazan with Hunter Stuart during the podcast interview.

Before arriving in Israel Stuart had 'no idea that a whole Jewish refugee crisis was created when Israel was established in 1948'. "It was one of the pieces of history either not available in my reading, or it hadn't fitted into my narrative," he confesses.

The two Israelis interviewing Stuart for HonestReporting and StandwithUs drive home the point that Jews have roots in the Middle East: Julie Hazan is from Morocco, Shahar Azani from Yemen. Shahar Azani mentions that neither he nor Julie could satisfy the late Helen Thomas, who told Jews in Israel to 'go back to Germany and Poland'. If they returned they would be allowed no semblance of Jewish life in Arab countries, difficulties Jews shared with other minorities, Shahar Azani tells Stuart. You can listen to this segment on Jews from Arab lands from 10:30 minutes into the podcast.
Posted by bataween at Monday, July 31, 2017