Jews and Muslims in Morocco: a complex history

In a well-publicised interfaith initiative in June, Jews and Muslims sat down together in Morocco to mark Iftar, the end of the month of Ramadan. In contrast to the gushing account by Yael Eckstein ('Why do Moroccans treat Jews so well? she kept asking) Here is a more nuanced report on NBC News of the complex relationship between the two communities. (With thanks: Tom) 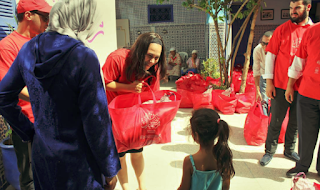 Yael Eckstein, the VP of the International Fellowship of Christians and Jews, hands a child a bag full of food for Ramadan (Yardena Schwartz/ NBC News)

Today, Jews account for less than 3,000 of Morocco’s 35 million residents — a small fraction of the nearly 300,000 who lived here before the establishment of Israel in 1948. Still, that tiny figure makes Morocco home to the largest Jewish population in the Arab world. And unlike other Arab countries, which essentially expelled their Jewish communities around the time of Israel’s establishment, the Jews of Morocco were not forced out when Israel declared its independence.

To be sure, there were isolated cases of violence against Jews in Morocco during this time. For example, in June 1948, two days of anti-Jewish rioting killed 44 people and wounded some 60 others. Still, attacks on the Jewish community were mild compared to other Arab countries. In Iraq, Egypt, Yemen, Algeria and Libya, for example, government-sanctioned anti-Jewish policies led once-large Jewish communities to dwindle to zero.  One of the most infamous attacks occurred in Iraq before Israel’s establishment, in June 1941, when over 900 Jewish homes were destroyed and 180 Jews were killed, including women and children, in a gruesome pogrom known as the Farhud. 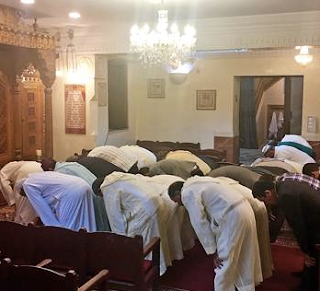 “Jews in Morocco saw the writing on the wall,” said Robert Satloff, director of the Washington Institute for Near East Policy, who spent two years living in Morocco while researching his book, "Among the Righteous: Lost Stories of the Holocaust's Long Reach into Arab Lands."  There was plenty of anti-Jewish sentiment in Morocco at the time, said Satloff, but compared to Jews in other Muslim-majority countries, the Jews of Morocco were relatively better off. “They weren’t stringing Jews from street posts like they were in Iraq."

Most of Morocco’s Jews, he said, left not because they were expelled, but because they felt a growing sense that they had no future there. Morocco was under French and Spanish rule until 1956, and as the Arab nationalist movement gained momentum, hostility toward Jews increased, he said, leading the vast majority of Morocco’s Jews to move to Israel, France and Canada. “It was really this mix of feeling like there’s no future for us in Morocco, and knowing we have a homeland to go to,” he said, referring to Israel. Yet despite the forces of Arabization and anti-Israel sentiments that gripped Morocco half a century ago, today Morocco is the only Arab country whose leader actively protects its Jewish community, said Satloff.

André Azoulay is a Jewish senior adviser to the king of Morocco, Mohammed VI. He also served his father, King Hassan II. Explaining how Morocco has remained protective of its Jewish community despite the anti-Jewish sentiments that overtook other Muslim countries in the wake of Israel’s establishment, Azoulay said, “We are fighting for that. But it’s not just top down,” he said, referring to the king’s protection of the community. “It’s also bottom up. Judaism in Morocco is in the roots, the identity, the mindset of the Moroccan people. Indeed, in 2011 Judaism became enshrined in the nation’s constitution as a facet of Moroccan identity.

Azoulay cautioned against painting a sweeping brush of anti-Semitism across the Muslim world. After all, Arabs are a Semitic people as well, with Hebrew and Arabic sharing the same roots.

Read article in full
Posted by bataween at Monday, July 24, 2017

Where would we be without court Jews like Andre Azoulay?

By the way, his own daughter did not stay in Morocco to enjoy all that tolerance and empathy. She went to France and rose to be a minister in Hollande's late unlamented socialist government. Anyhow, Perhaps Daddy's influence helped her rise in France.

"court jews" Not because he was a very successful Executive Director at France's BNP Paribas Bank for some 30 years and was called by Hassan II to advise on economic reforms. Since when is a country's economic advisor a "court Jew"?

"She went to France and rose to be a minister"
She was born and grew up in France as a French citizen and graduated from the prestigious ENA, juste like Emmanuel Macron and about half his government and --by the way-- her predecessor on the job Fleur Pellerin who was from the same class.

You just can't fathom that a Moroccan Jew could rise just because of merit.
Well, at least you didn't suggest like Bin Nun of the late Sunday radio program The Israeli connection that she got the job at the culture ministry as a token Moroccan woman.

Elyahu, the Azulay family has more culture in their little toe than the entire Ashkenazi community in Israel combined.

And, oh Elyahu: calligraphy IS art.

By the way, Elyahu, you can hold hands with all the Arab countries who oppose Audrey Azulay's candidacy as Director General of UNESCO to replace Irina Bokova.

Sylvia, I think that you are putting thoughts into my head that were not there. As to court Jews, financial advisor was precisely one of the main roles that they played in pre-modern Germany and elsewhere. You might read Jude Suess or Jew Suss by Lion Feuchtwanger, the novelist, who wrote that novel about a court Jew. Also, it might help to look up the concept of court Jew, perhaps in the Encyclopedia Judaica or the Hebrew Encyclopedia [in Hebrew]. In Iraq too, the first finance minister was a Jew circa 1920. So in both Europe and Muslim-ruled lands Jews were sought out as financial experts, as in the USA today. [But that expertise and that of the Sassoon family did not save the Iraqi Jews.]
As to calligraphy, I wrote nothing about it. But I can say that my Yiddish-speaking grandfather from the Ukraine did beautiful calligraphy with Hebrew letters, uncultured as you might think he was.

As to Azoulay and his daughter personally, I did not know all that much about him. But according to what I did know, he certainly fits my definition of court Jew, however. The non-Jewish, Christian or Muslim, ruler needs him, uses his ability, and yet he is humiliated directly or indirectly, whether by the ruler, other officials of the court and/or the ruler's people. Of course, he builds up a fortune. But sometimes the non-Jewish ruler or non-Jewish state takes it away from him. Again, rich as he typically is, he accepts the humiliation, which as you know is de rigueur for non-Muslims in Islamic dominions. But you look up the meaning of the term court Jew and if it does not fit Azoulay, I will take it back.

As to the daughter, I did not know that she was born in France or an enarque. But it seems to me that in France, as elsewhere, connections help in getting high positions. Hollande too is an enarque [graduate of the ENA] and thus I am not impressed by the ability of enarques. Is it fair to say that enarques get unfair promotion in France? This is not to say that Audrey Azoulay is not competent but if she got the UNESCO job she might toady to the Arabs and other Muslims. However, as culture minister in France, she was certainly better than her predecessor Filipetti who sponsored an exhibit of Arab terrorist art at the Grand Palais or Petit Palais or some such place.

"You just can't fathom that a Moroccan Jew could rise just because of merit"
Of course I did not say that or think that. Don't put words in my mouth or thoughts in my head. You refer to Miri Regev, minister of culture and sport. I think that Netanyahu picked her precisely to do what she has been doing over the past few years. He has made mistakes but not in Miri's case. I basically agree with what she has been doing. And my wife admires her as a woman. Maybe you, Sylvia, have a prejudice about somebody that you don't really know, that is, me.