The Egyptian press is reporting that government funds have been approved to restore the Nebi Daniel synagogue, the Middle East's largest. The synagogue has been closed since the partial collapse of the ceiling in the ladies' gallery. Report in The Times of Israel (with thanks: Lily):

The Ministry of Antiquities’ Project Sector on Wednesday approved the funds for restoring and developing the Eliyahu Hanavi Synagogue, according to the head of the Islamic and Coptic Monuments Department, al-Saeed Helmy Ezzat, The Egypt Independent reported from a translation of the Arabic-language daily Al-Masry Al-Youm. 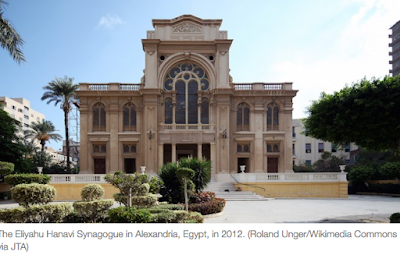 The synagogue was forced to close several months ago after part of its ceiling collapsed, The Independent reported.

Ezzat said the government will pay for the restoration even though Egyptian law requires the community to cover such work.

Oops, that's my failing eyesight, will correct that.