The newspaper Israel Hayom reveals previously unseen testimony and photos showing that in early years of the state, not only were Yemenite refugee children who died autopsied without consent, doctors also performed unauthorized tests on live children. The findings need to be seen in the context of an obsession with medical research in the 1950s, lax regulations, and that many children had arrived from Yemen in a poor state of health. (With thanks: Sylvia)

The Knesset Special Committee on the Disappearance of Children from Yemen, the East and the Balkans met Wednesday morning, after Israel Hayom published an exclusive report exposing doctors' testimonies that unauthorized medical tests were performed on children who went missing in the early years of the state and whose fates were unknown to their families. The documents also revealed that children who died were autopsied without the consent of their parents. 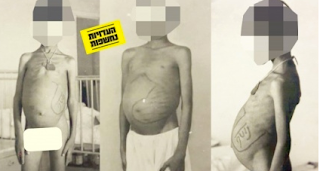 Committee members were presented with the protocols of previous government committees of inquiry into the missing children, as well as proof that some of the children died after being subjected to experimental medical treatments.

The disease is still with us. One has only to listen to radio on the topic, where callers either find excuses to those doctors and hospitals or seek to divert the attention from the issue by embarking on some unrelated futile rantings. and the excuses:"yes but those were the people who built the country".

No telling what else they did. The most damning documents were destroyed seven years later according to one doctor's testimony.

The horror... the horror

You are so right Sylvia; even Point of No Return can possibly find a hasbarah for this atrocity.