A Yemeni Jew has been in jail and 'tortured' for over a year, accused of helping a Jewish family escape the country. He will not be released, say the authorities, until the old Torah scroll the family took with them is returned to Yemen. 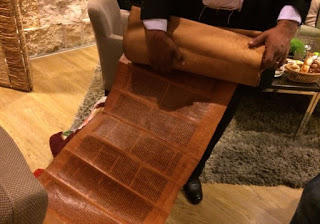 The Houthis in Yemen have refused to release the Jew, Levi, until the family, which is now in Israel, agrees to send the Torah scroll back to Yemen.

Manny Dahari's family was on the last Jewish Agency airlift from Yemen to Israel in March 2016. He says that the Torah scroll has been in his family's possession for generations.

"Unfortunately, my family will not release it to them or anyone else. It will remain with my family in Israel," he writes in a Facebook post.

On the family's arrival in Israel, young members were photographed reading from the scroll, watched by Prime Minister Benjamin Netanyahu. The Houthis claim that the Torah scroll belongs to the Republic of Yemen.

The fifty Jews still in Yemen have proclaimed their desire to stay there, in spite of the war raging in the country. They live in a government compound in the capital Sana'a. Manny Dahari claims that the Houthis, who are in control of the capital, broke into the compound and seized the remaining Torah scrolls, thus 'preventing the Jews from practising their religion freely.'

"This is just a continuation of the oppression against Jews in the Middle East," he writes. "Close to one million Jews have been forced out of their homes throughout the Middle East. Yet, the international community continues to ignore these atrocities. They have turned a blind eye to the ethnic cleansing of Middle Eastern Jews.

"Why are we different than any other refugees? Why is there a double standard when it comes to Jews?


"I know there is not much we can do from here, and this is definitely not going to free Levi, but at least this will bring some awareness to the way minorities are treated in Arab countries. It's about time they hold them accountable for their crimes against humanity."

Manny Dahari talks too much.
There is a civil war in Yemen, atrocities are committed everyday. He gave them enough clues on his facebook page to get to the people who helped them escape.

He should head the wise words of Amos:
"המשכיל בעת ההיא דום כי עת רעה היא"
"the cautious should keep silent in those times because this is an evil time."

Don't the Yemenites understand that the civil war there is a punishment from Allah for the way they treated their Jews?!

off topic//
The Syrian Arabs in the United States were recognized as "white" by court decision:
The Census Bureau of the USA defines White people as follows:
- - - - - - - - - -
"White" refers to a person having origins in any of the original peoples of Europe, the Middle East or North Africa. It includes people who indicated their race(s) as "White" or reported entries such as Irish, German, Italian, Lebanese, Arab, Moroccan or Caucasian.[2]

as to Syrians being recognized as white in the USA, see the court decisions United States v. Shishim & Dow v. United States.

I haven't looked at your reference but that usually comes up when the court rejects a charge of racism from someone from NAfrica or the Middle East. I don't think it's a "new" recognition.

That tells you how ignorant are those Ashkenazi Jews who make a soup out of this color business.

When a Yemenite brother & cousin arrived in America & wanted to get drivers license, each Yemenite was assigned to a different "race." The very brown one was "white!" And that's even though in New York a black woman mistook her for being black. Another brown one was "Hispanic!!!" And that's even though in New York an Indian man mistook her for being Indian. The third one was deemed "O," "Oriental," and I'm not sure what that means in America, if it's Oriental including the Middle East or Far East Asia. We reject all of these artificial identity constructs of America. Our identity is based on community.