Welcome to the 'state of Morocco' in Israel...

Israel has never been a western state, and it is only in the eyes of its Europhile cultural elite that the state's increasing Middle Eastern-ness is concerning and unacceptable. Thoughtful piece by Seth Frantzman on his blog, Terra Incognita (with thanks: Michelle): 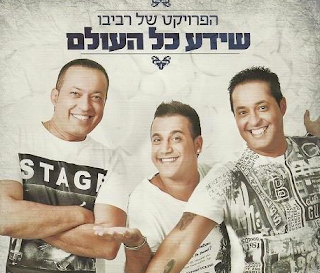 The Revivo music project: why should there be no Moroccan culture in a country with so many Moroccans?

What the survey tells us is there is a minority of Israelis who are prepared to leave the country; many already have children who live abroad. These Israelis tend to be more left-leaning, self-identify as having “Western values” and are concerned about the country becoming less Western. They are wealthier and their European origins give them access to a foreign passport. This last issue is important when it comes to identity.

Almost three quarters of Israelis have their origins either in pre-state Palestine or in the Middle East and Africa. This includes the quarter of Israelis who are Arab. A minority of Israelis have origins in Europe. Yet the European minority still feels like a cultural majority. During this year’s Independence Day torch lighting ceremony, an Israeli journalist complained that there was too much “Mizrahi” (eastern) music and that the ceremony had “established the State of Morocco” in Israel.

Why did he think there should be no Moroccan culture in a country with so many Moroccans?

In 1946 there were only 543,000 Jews in Palestine. Between 1954 and 1964, according to the Immigrant Absorption Ministry, around 250,000 Jews came to Israel from Morocco. You’d think the musical impact of that community, almost a third of the country’s population at the time, would be immediate and that by 2017 European-origin Israelis would no longer be whining about it. But they still are whining, because for some of them Israel cannot have diversity, it cannot have Ethiopian culture, or Russian culture, or Moroccan or Iranian or even Arabic culture. These Israelis have waged a jihad against everything non-Western since 1948, and they have lost.

To those Israelis who dreamed of Israel being a “villa in the jungle,” a kind of Denmark in the Middle East, or a kind of Rhodesia, everything that was non-European was “primitive.” Journalist Ari Shavit asked fellow writer Amos Elon if Israel had this “primitiveness” in a 2004 interview and Elon agreed; the “primitiveness” comes from the Arab countries, he said. What he meant was Jews from those countries.

This colonial mentality of a subset of Israeli society cannot accept that Israel is not a Western country, that it has major influences from non-European peoples and cultures. It is a hybrid civilization, with Western currents in it but a foundation that is rooted in the Middle East. Jewish civilization has always had that hybridity. Since the time of the Hasmoneans fighting the Greeks and the war with Rome, or the expulsion from Spain at the hands of Catholic Europeans, Jewish history has been East struggling with the West.

Some Jewish thinkers cannot accept this. Richard Cohen in his 2014 book Israel: Is it Good for the Jews predicted what would happen when Israel’s “fighting intellectual, rifle in one hand and a volume of Kierkegaard in the other,” became a minority and “Jews from Islamic lands” became the majority. Cohen didn’t realize Israel was never a country of “Jews holding Kierkegaard in one hand.” This was a myth invented among American Jews about Israel, in order to convince themselves Israel was like a miniature version of the Upper West Side in New York, only with tanks and a flag.

Why the fear of “Jews from Islamic lands,” who are presented as barbarians by Israel’s European-rooted writers and their fellow travelers abroad? The same “Western values” that welcome Syrian refugees in Europe despise Syrian Jews in Israel? The same people who value the diversity Moroccan immigrants bring to Paris despise Moroccan Jews in Israel.

Because Israel’s Europhile cultural minority is rooted in a different time, the era of Rhodesia and the Old South, when non-Europeans were still openly called primitives. They cannot accept that Israel is not a Western state and that the revolution of Zionism has overthrown Europeanism in “their” Levant. They cannot accept the hybrid culture of Israel. This is why they imagine that only when Israelis are not “welcomed” in Europe will Israelis end the occupation of the West Bank.

But the majority of Israelis today don’t care about being welcomed in Europe and don’t seek European approval. They don’t see themselves as primitives begging for acceptance in the halls of Paris or Berlin. They are proud of their society, and they don’t think that they need to beg acceptance from the grandchildren of Nazis.

Read article in full
Posted by bataween at Wednesday, May 10, 2017