Torches are lit to celebrate and decry Israel

Eli Amir, 79, a Baghdad-born writer and civil servant who immigrated to Israel in 1950 was chosen to light a torch at the Independence Day celebrations in Jerusalem. 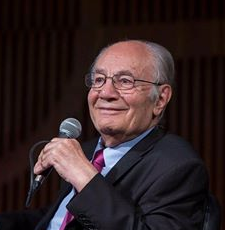 Rising from being a messenger to the Prime Minister's office, Amir became director of the Absorption ministry. His semi-autobiographical novel “Scapegoat” (1983), about a 13-year-old Iraqi boy who immigrates to kibbutz in Israel, is part of the Israeli school syllabus. He is also the author of “Farewell, Baghdad” (1992), “Saul’s Love” (1998) and “Jasmine” (2005).

"Did I miss Baghdad?" Amir answered Tsionit Fattal Kuperwasser, who interviewed him at the Babylonian Heritage Center near Tel Aviv." My Baghdad doesn't exist anymore. It lives only in 'Farewell Baghdad'. "

By contrast, here is how some Moroccans in Rabat were marking Israel Independence Day - by burning the Israeli flag and shouting 'Death to Israel'.
Posted by bataween at Tuesday, May 02, 2017