The Israeli government is considering a proposal to allow Arab building on state land in Area C of the West Bank, an area under full Israel security control. But the rights of Jewish property owners in Area B, an area under joint Israeli-Palestinian control, are being ignored, this Arutz Sheva report claims: 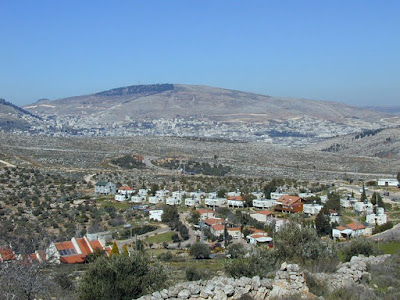 A view of the West Bank at Itamar

Leor Zeberg, a real estate expert in Judea and Samaria, called for the government to allow the Jewish residents to build on their own land before allowing the PA to build new Arab communities on state land.

According to Zeberg, there are thousands of acres of land which belong to Jews and which the Jews have been banned from building on since the signing of the Oslo Accords in 1993.

"In Judea and Samaria there are thousands of dunams which were purchased by Jews, some before the establishment of the State of Israel and some which were [purchased] in the 1980s and afterwards," Zeberg said. "From the moment the Oslo Accords were signed, Jewish owners were denied the possibility of building on these lands, and the property rights of the Jewish owners have been damaged and their ownership rights cannot be actualized."

"There are investors from Herzliya who, because of their Zionist [ethos], bought land in northern Samaria a few decades ago, which years later were declared part of Area B [off limits to Jews]. When their grandchildren tried to realize [their ownership rights], they were denied."

He called for a change in policy toward Jewish landowners in Judea and Samaria. "In addition to the damage to landowners in Area B. "Jews who want to purchase land in Area C are also facing difficulties and bureaucracy . It is important that in the discussions which arise, a solution be found to the property rights of the Jews in Area B, before they take care of Arab construction in Area C."