Manny Dahari: How I rescued my family from Yemen

Long feature in which Manny Dahari tells how he escaped Yemen for the US, and then engineered the flight of the rest of his family last year. Rhona Lewis reports in the Jewish Press (with thanks: Malca):

When I speak to Dhahari, who visited Israel in January this year as a participant in Yeshiva University’s Israel Winter Mission, he takes me into a world where anti-Semitism is the stuff that life is made of. 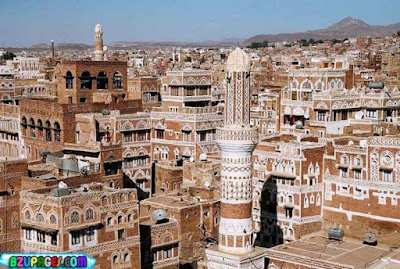 Old Sana'a as it used to be. It is not known how much of the city has survived the civil war

“As a Jew in Yemen, you live in your own little bubble and don’t associate with the world around you. You’re always seen as a stranger – even though you’ve been there for thousands of years,” he says. “Every morning, on our way to school, we faced an attack from the kids who were waiting for us with a pile of stones,” he recalls. When Manny was hit by a stone launched into their backyard, his father confronted the father of the attacker. “Maybe you should consider converting to Islam,” said the father. “Then nothing would have happened.”

Although there were a few friendly neighbors, you could never be too sure. “When I was about ten years old, my Arab neighbor, who was also my friend, tried to set me on fire on Shabbat morning as I was walking to shul and chatting with him. He stuffed a lit firecracker in the pocket of my jacket,” recalls Manny. Shortly afterwards, Manny was the first to run to his best friend, who had been shot. Years later, the pain of the horrific loss of a young life still resounds in Manny’s voice.
In 2006, after two years of negotiations and red tape, and thanks to a frequent traveler to Yemen who was involved in the Jewish school, Manny’s older brother, Tzemach, left Yemen for the US. “I was devastated when I realized that my father lacked the financial means to allow me to follow my brother,” says Manny. Barely thirteen years old, Manny understood that any future lay only in America. But now the door had slammed shut.

More about Manny Dahari
Posted by bataween at Monday, May 29, 2017