Every so often a voice may be heard in the Arab world arguing that their state cannot be democratic unless the rights of all minorities are respected. The latest such voice belongs to Ammar al-Hamadani, an Iraq lawyer. He is calling for justice for  Iraqi Jews, who were stripped of their citizenship and denied compensation for their property.  In spite of receiving death threats, Hamadani is determined to speak out. Rachel Avraham reports  in Israel Hayom (with thanks: Michelle, Lily):


When people think of Iraq, they think of a country plagued by war, on the verge of ‎collapsing. They think of a failed state that ethnically cleanses minorities and blows up holy sites as well ‎as ancient archaeological treasures. Most Iraqi Jews see nothing but a bleak picture when they look ‎at Iraq today. However, within this war-torn country, there is a Muslim voice of hope, calling out ‎for his country to become a true democratic state and to give Iraqi Jews the justice that they ‎deserve. He does this under the threat of death but remains determined to speak out for all of the ‎minorities in his country, including the Jews.
‎
Ammar al-Hamadani, a Muslim Iraqi lawyer, is working to ensure that Iraqi Jews ‎receive the compensation they deserve in a new democratic Iraq after they were expelled from ‎the country following Israel's 1948 War of Independence. Referring to the expulsion of Iraq's Jews and ‎the seizure of their property as "unconstitutional and inhumane," he stated with sadness that the ‎laws that prompted the Iraqi Jewish community into exile remain in force today "despite the ‎political change that took place in Iraq in 2003 and the enactment of a new Iraqi constitution in ‎‎2005 in which we had some hope for change for Iraqi Jews in a democratic, federal and multi‎cultural Iraq."‎
Al-Hamadani emphasized that it is unlawful to strip any Iraqi of their citizenship for any reason and ‎it is the right of "any Iraqi who has lost his citizenship for either political, racist or sectarian reasons ‎to request the restoration of citizenship." However, al-Hamadani noted that while the Iraqi ‎Constitution permitted the restoration of Iraqi citizenship for those who lost it for the above ‎reasons, Iraqi Jews were excluded: "Iraqi Jews remain deprived of justice under the new Iraq in ‎such a crude violation of the constitution." ‎ 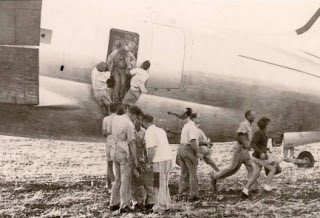 ‎
Iraqi Jews escaping to Israel on Operation Michaelberg in 1947

"What is most puzzling is the very constitution that speaks of the freedom of belief and religious ‎practice of Muslims, Christians, Yazidis and Sabian Mandaeans does not address the Jews of Iraq ‎as a basic religion," al-Hamadani proclaimed. He noted that in theory, the Iraqi Jewish community ‎has the right to bring their case for restoring their rights before the Administrative Court in Iraq, ‎which is linked to the Iraqi Supreme Judicial Council -- technically independent of the ‎executive authority and the government. However, he asserted that in reality, the Administrative ‎Court is politicized, works to defend the actions of the Iraqi government and thus won't give them ‎the justice that they deserve.


"Any lawyer who tries to defend the Jews of Iraq before these two ‎government-controlled courts is being threatened with blackmail and intimidation because your ‎opponent is the judge himself, so that the lawyer cannot take the liberty to defend his clients and ‎therefore, issues remain floating in the court because lawyers fear to follow up,"‎ he explained.
‎"Based on all the above, I am hereby demanding that the case of Iraqi Jews' rights become a ‎universal matter that is adopted by international courts and organizations," al-Hamadani stressed. ‎‎"This should secure an international stance in the face of the Iraqi government, which could force it ‎into providing justice to the honorable Iraqi Jewish sect and to restore all their rights just like all ‎sects of the Iraqi people. Also, I would like to confirm my willingness to provide all kinds of ‎support in defense of the rights of my Jewish brothers. And allow me to note here, I am doing all ‎this pro-bono and out of commitment to my national duties towards my country."‎
In response to al-Hamadani's call for Iraqi Jews to receive the compensation that they deserve, ‎Aryeh Shemesh, the leader of the Babylonian Jewish community in Israel, praised him: "We have ‎to praise this person who dared to talk clearly and to tell the truth. This is a major ‎thing. I just hope that more people will get the same idea to help us fight to get compensated."‎
Levana Zamir, the head of the Central Organization of Jews from Arab and Islamic countries, ‎added: "Sometimes very important things begin with just normal people, simple people, a lawyer ‎like him. Then another can do the same and then the others. It can lead to all of the Arab countries ‎recognizing their mistakes. But he is not the first. In Egypt 10 years ago, Amin al-Mahdi, an ‎Egyptian journalist, wrote a book titled 'The Other Opinion.' He said exactly the same thing. The ‎book was translated into Hebrew.

Profile of Rachel Avraham
Posted by bataween at Friday, May 26, 2017