From Tehran to LA, with a few stops between

Fascinating story in the Jerusalem Post by Natan Odenheimer about Dora Kadisha-Nazarian, who fled Iran when the Shah fell in 1979. The family eventually settled in California where her father established a business empire. They are also great philanthropists. (With thanks: Pablo) 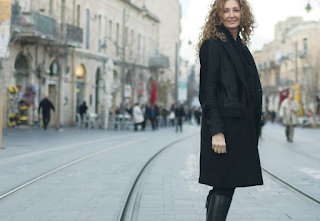 Nazarian’s grandmother was 12 when her family packed whatever belongings they could fit into suitcases and ran for their lives. Her parents were well-to-do Russian Jews living in Tbilisi until the political climate changed.

When the Bolsheviks grew stronger and outbursts of violence threatened their community, they skipped across the border to Azerbaijan and traveled to Tehran, where she took the name Golbahar, Spring Rose in Farsi.

Golbahar married young, but shortly after giving birth to two children – Izak and Younes – was widowed. “I don’t know where my grandmother got her spirit from,” says Nazarian smiling, “but she decided not to stay with her late husband’s parents. She knew how widows were treated in the Jewish Quarter of Tehran and concluded it’s not for her.” Instead, she found a small single room for her little family and supported her two children by doing small mending and sewing jobs.

Izak, Golbahar’s firstborn and father of Nazarian, understood that if he wished to make things right for himself he must earn money. At the age of five or six he sold matches and cigarettes, and continued with any kind of unskilled labor he could find. When he became a teenager, his experienced immigrant mother encouraged him to seek opportunities abroad. He saved money and in 1947, a few days shy of his 18th birthday, traveled to Italy to study. In Italy he met a man from the Jewish Brigade who recruited him to the Zionist cause, and several months later, after a short period of paramilitary training in Genoa, he set foot in the port of Haifa and was sent to fight in the 1948 War of Independence with the Seventh Tank Brigade.

After the war, his mother and brother joined him from Iran. In the newly founded Israel, Golbahar picked a Hebrew name that corresponded with her Farsi one: Aviva (“spring”). The three resided in a house with no ceiling in Holon.

“Those were tough times,” says Nazarian. “My father likes to mention the lizards crawling on the walls and that economically the future didn’t look promising.” Izak worked in construction, as a bus driver and in an electric shop.

In 1957, Golbahar advised her son to return to Iran. She told him Iran was growing and prosperous, that there were opportunities there, and that he should travel east, earn money in Iran and come back to Israel. So 10 years after he left, Izak was back in Tehran. He found his work experience in Israel to be helpful. The late 1950s and 1960s were an era of vast growth in infrastructure in Iran. In addition, the romance between Israel and Iran was flourishing. Izak nurtured contracts with the Shah’s government and brought Israeli engineers, technicians and construction companies to work in Iran.

This lucky turn of events allowed Izak to send for his mother and brother who reunited, for the second time, in Tehran.

Golbahar, like any good Jewish mother, wanted to marry off her reluctant son, and cunningly introduced him to a young Persian Jewish woman named Pouran. Not too long after, Dora was born. She went to an American elementary school, then to a Jewish high school, and used to visit relatives in Israel during the summers.

Nazarian was 18 when the 1979 Islamic Revolution erupted. Like her grandmother, she packed a suitcase and traveled far to find a safer life. Her father tried to salvage part of his business and stayed in Iran. Around that time, Nazarian started seeing a fellow Farsi Jew by the name of Neil Kadisha, whom she had befriended in Tehran; when she announced her engagement, her father made the trip to Israel for the festivities. To this day, he is thankful he didn’t skip the party. On his way to the airport, heading back to Tehran, he was informed that the head of the Jewish community in Tehran had been executed and that his own name was next on the list. He canceled his return trip to Tehran and has never gone back.

Read article in full
Posted by bataween at Wednesday, May 03, 2017