Christians are leaving - and not coming back

It's not often that the oppression and flight of Christian minorities from the Middle East is mentioned in the same breath as the flight of the Jews. This article by Maria Abi-Habib in the Wall Street Journal looks at the sorry fate of Christians in Iraq and Egypt. (with thanks: Eliyahu) 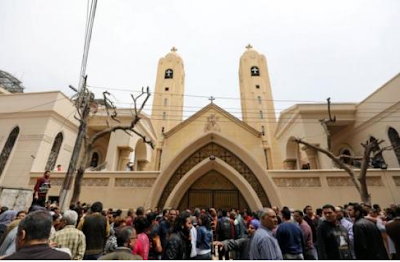 Today, more Arab Christians live outside the Middle East than in the region. Some 20 million live abroad, compared with 15 million Arab Christians who remain in the Mideast, according to a report last year by a trio of Christian charities and the University of East London.

In 1971, Egyptian Coptic Christians had two churches in the U.S. Today there are 252 Coptic churches, according to Samuel Tadros, a senior fellow at the Hudson Institute’s Center for Religious Freedom. Mr. Tadros estimates that some one million Copts have fled Egypt since the 1950s, many to the U.S., Canada, U.K. and Australia.

Mr. Trump has indicated he would welcome more Christian refugees from the Middle East. His initial efforts to overhaul immigration policies have been blocked by the courts amid criticism his executive orders would discriminate on the basis of religion.

The Arab Christian diaspora in the U.S. has already emerged as powerful in politics and business. Dina Powell, Mr. Trump’s influential deputy national security adviser, is of Egyptian Coptic origin. With the near-depletion of the Christian population in the Middle East and the recent flight of the Kurdish minority Yazidis from Islamic State, followed just a few decades after the flight of its Jews, many fear for the region’s future—not only because of the rise of radicalism but the loss of talent needed for sputtering economies.

Killed in the Palm Sunday attack at the church in Tanta was Mina Abdo, an engineer who left Egypt over a decade ago with his family, in part to allow his wife Yvonne to pursue her profession of gynecology. Christian Egyptians have had a hard time getting work in her field since the 1970s when a fraudulent police report emerged accusing the sect of plotting to outnumber Muslims by performing abortions on unsuspecting Muslim women, or secretly slipping them birth control. The document has been likened to the Protocols of the Elders of Zion, a fabrication used to discriminate against Europe’s Jews a century ago.

The family returned to Tanta after celebrating Holy Week for years in their adopted home of Kuwait City. In Egypt, they could sit under a steeple, which their church in Kuwait lacks because official churches are banned there. Mr. Abdo and his son, Kerollos, 11, took the front pews in Mar Girgis, which had a good view of the altar, where many of the family had been baptized and married.

When the suicide bomber detonated his vest that morning, the explosion mangled the same front pews, killing Mr. Abdo instantly. His body shielded his son, Kerollos, who survived but suffered shrapnel wounds to his face and right leg.

Two days after the attack, at a nearby hospital, Mrs. Abdo and her 14-year-old daughter, Miriam, tended to Kerollos. Mother and daughter wore the sweaters Mr. Abdo packed for their trip back home. Miriam wore her father’s crucifix, his wedding ring and hospital identity tag hanging off the thick gold chain—possessions the hospital put in a plastic zip-lock bag when Mr. Abdo was pronounced dead on arrival. His remains would stay in Egypt.

When asked whether she’d return, Mrs. Abdo hesitated. “I love Egypt. I love my memories here. But I’m scared now,” she said. “We will come back for visits, we must. My husband is buried here.”

I, myself, have spoken with Christians from the Middle East, I can definitely say that this article is - 95% true. The other 5% is nothing but insults toward these people. I'm sure the author of this article is very well educated and knows the difference between Copts, Assyrians, and Maronites on the one hand, and Arab Christians on the other. Calling all these people "Arab" Christians when they're certainly not, not only shows ignorance, but also smacks of racism.

She is appropriating them into the "Arab nation" because pan-Arab nationalists don't want to recognize other nationalities in the Middle East besides the Arabs.

Let us not forget, that the original and real Egyptians in Egypt are the Copts. They are the straight descendants of Helenistic Pharaoh, and the first to convert to christianity. That is why they are called in Egypt: Gypti or simply Epty, which means Egyptian, which became Copte.
It is only when the Moslem's Troups invaded Egypt during the seventh centenaire, that Egypt's religion became Islam, and the Copts became "unbelievers".
This truth is difficult to swallow for some Islamic Egyptians today. Some 500,000 Copts who could afford it, left Egypt and dispersed all over the world, becoming "refugees by their own will". Just like it happened during the mid 20th to Egyptian Jews who wasn't formally expelled...
Levana