Call to safeguard heritage of dying Jews of Egypt

Mina Thabet is a human rights lawyer in Egypt who has served time in jail for his  defence of minority rights in Egypt. Here in Mada Masr he uses the example of the beleaguered Jewish community to explain how hate speech and lack of state protection puts minorities at risk. Jewish heritage must be preserved, he insists. (With thanks: Raphael) 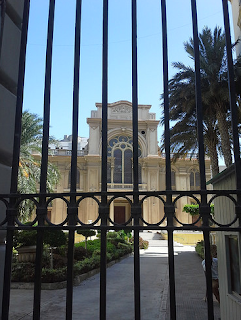 A small number of Jewish families stayed in Egypt, among them leftist activist Chehata Haroun and his family. According to Haroun’s daughter, Magda, when her father tried to fly her older sister to Paris for treatment, Egyptian authorities agreed only to give him an exit visa with no return, so he left his daughter to die and never left the country [13]. When he died in 2001, his family had to bring a French rabbi to perform the ritual prayer for him, because they did not have a Jewish rabbi in Egypt.

The same happened with the death of Nadia.

Early this month, it was the first anniversary of Nadia’s death, and Magda went to her older sister’s grave along with her current Christian husband and her Muslim daughters to perform their rites. She found that a group of youth had desecrated her sister’s grave. They also insulted her and insulted Judaism [14]. I can’t imagine how Magda felt about that. It’s very hard for anyone to see his beloved ones insulted in life and death, just because they had a different religion.

Despite the fact that we have the oldest Jewish cemeteries in the world, they have been left vulnerable to desecration and vandalism. Cemeteries are not the only neglected part of Jewish legacy in Egypt. According to Magda, there are about 12 Jewish synagogues in Cairo and Alexandria left without maintenance. The majority were closed because there is no one left to pray there.

Furthermore, there are registers belonging to the Jewish community in Egypt, which are part of history that need to be digitalized and safeguarded. The original written Torah also needs to be restored and kept in a museum, along with other parts of the heritage of this dying community.

Hate speech and lack of equal protection under the law inside the community creates a hostile environment for minorities, where violence could be justified. Since 2011, at least 40 incidents of sectarian violence occurred in Egypt [17]. Most of these incidents followed hate speech, which incited the perpetrators to commit the attacks. Since 2011, sectarian violence took the lives of at least 100 Egyptians, where the absence of accountability and lack of protection for vulnerable groups had become a common feature [18].

We should learn from our mistakes. We should start preserving our Jewish heritage and restore synagogues. We should face hate speech and discrimination. We should stop sectarian violence and bring its perpetrators to justice.