Over at the BBC, its longstanding Middle East editor Jeremy Bowen has been broadcasting 'Our Man in the Middle East', a series of mini-programmes, most of which so far reflect his personal view of the 'Israeli-Palestinian' conflict. 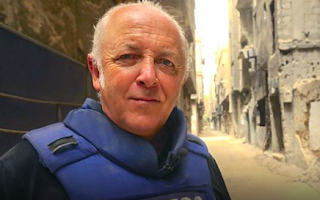 Jerusalem-based Jeremy Bowen has long been criticised by supporters of Israel for his bias in favour of the Palestinians.  In the light of persistent complaints that he never mentions Jewish refugees in his reports,  I was interested to hear if  this segment, Crossing the Divide,  was going to be any different.

At 5.22 into the programme, Bowen says he has learned about North African, Iraqi and Yemeni Jews by 'eating their food' in his visits to Mahane Yehuda market. But food is all he seems to have learned about, for we hear nothing about the circumstances in which these Jews 'emigrated' to Israel.

At 6.20 Bowen again mentions 'Mizrahi' Jews, but it is only in the context of the 'ethnic divide': 'brown-skinned Mizrahim excluded by pale-faced Ashkenazim ...who created the state and behaved as if they owned it.' I would challenge Bowen to identify these pale-skinned creatures.

Referring to Ein Kerem, where Bowen made his home, he launches into the familiar narrative that it was a Palestinian village inexplicably emptied of its Arab residents. (He omits to mention that the Israelis were defending themselves in an Arab-instigated war. There is the obligatory mention of the de-contextualised 'Deir Yassin massacre', but no attempt to mention any of the numerous massacres of Jews by Arabs ). Israel passed laws seizing abandoned (Arab) property, we are told.

At 8.10 we learn that hundreds of thousands of Jews 'from North Africa' were absorbed by Israel. 'They no longer wanted or were permitted to live in Arab countries,' according to Bowen.

So yes, Bowen does mention Jews from Arab countries, but nowhere does he use the word 'refugee'; he does not refer to Jewish property seized, nor does he mention the vindictive pogroms or state-sanctioned persecution which caused most to flee. That would confuse the simplistic 'good guys-bad guys' narrative that the BBC has been feeding its listeners for years.

In contrast to the forceful language used about the Palestinian nakba, Bowen uses obfuscation and euphemism. We can expect that the average listener will not come away any the wiser about Jewish refugees.

'Our Man in the Middle East' may be heard online for about one month after its first broadcast.

He's European, and a journalist, and European. What do you expect?

So the supposedly sophisticated BBC goes in for simplistic narratives with the Arabs as ever good guys and Jews/Israelis as ever bad guys. This is just the continuation of the British policy in the 20s and 30s when the UK administration in the country clearly took the Arab side. Moreover, during the Holocaust the BBC resisted reporting on the ongoing mass murders.

And he brings out that old red herring of "pale white" European Jews and "Brown" Oriental Jews. If Bowen saw my mother's father, Belarus born, he might have a severe attack of cognitive dissonance he was actually brown-skinned. But for the BBC if a story is not simplistic it is not a good story.

If Bowen saw my mother's father