At long last, Egypt may agree to records access

Egyptian Jews are hopeful that they could be on the verge of a breakthrough: the Egyptian government has in principle recognised the right of Egyptian Jews to have access to their communal records. 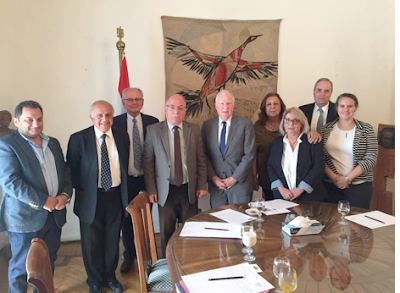 At a meeting on 2 May 2017 with a delegation representing the American Jewish Committee (AJC),  the Jewish Community in Cairo and the Nebi Daniel Association, Culture Minister Helmy Al-Namnam said that he would have no objection to a scanned copy of the registers being deposited with the Chief Rabbinate of France in the Consistoire de France once their cataloguing is complete in six to seven months. (The expertise to read  the various languages and scripts and issue certificates with the appropriate stamp of religious authority can only be found outside Egypt.)

The Minister indicated, however, that the Ministry of Foreign Affairs in Egypt would have to give its agreement. This Ministry would be responsible for organising the transfer of the copies.

Representations to the Minister of Foreign Affairs are being made. If it materialises,  this development would represent a breakthrough for the Nebi Daniel Association. Since its founding 14 years ago,  this body has been stymied in its campaign for unfettered access to the registers recording the life cycle of Jews in Egypt since 1830. Records of births, circumcisions, coming-of-age, marriages, divorces, civil status and deaths as well as rabbinical rulings are a key to the religious identity of Jews from Egypt and their descendants scattered around the world. In Alexandria alone, more than 60,000 pages of well-organised data are not only essential for issuing religious certification but are also a treasure trove of genealogical and historical data. All such records have recently been taken from the Community offices in Cairo and Alexandria by the National Library and Archives of Egypt.

Among other heartening developments following the Nebi Daniel mission to Egypt is the revival by the leader of the tiny local Jewish community, Magda Haroun, of the 'Drop of Milk' charity. This charity, which includes several non-Jewish members, has expanded its remit to include the preservation of Egypt's Jewish heritage after the last Jew dies.

The mission, led by Rabbi Andrew Baker of the AJC, has announced a number of other promising developments resulting from their meetings with Egyptian officials at the end of April and beginning of May. The Nebi Daniel Association is funding a survey of the Torah scrolls in the Cairo synagogues.  Rabbi Armand Benhamron, an expert scribe who accompanied the delegation, examined all the scrolls in Cairo under the supervision of members of the Egyptian Ministry of Antiquities, with the purpose of determining their continued religious suitability.

The delegation paid a visit to the Bassatine cemetery in Cairo, one of the oldest Jewish cemeteries in the world. Work is finally progressing to secure the cemetery by building a wall enclosure to prevent squatters from encroaching into its perimeter and to prevent garbage from being dumped. There are plans  to clean the cemetery, build alleyways and erect a memorial wall.

In the main Adly synagogue, the basement will be renovated for developing a social history display with religious artefacts. This follows recommendations from an AJC-sponsored visit in 2008 by the then vice-director of the Jewish Museum in Berlin. The Drop of Milk member in charge of the project will be sponsored to visit and learn from similar efforts in Europe and the USA.

Other projects include a cultural centre in one of the synagogues, the cataloguing of books in the various synagogue libraries with the help of the Israeli Academic Center in Cairo and the Alliance Israelite Universelle in Paris. With the support of the American Research Center in Egypt, a detailed survey of the remaining synagogues in Cairo will be made. The Diarna organization is planning to visit Egypt this year to make a full photographic record of Jewish sites.

The first sign of a more positive approach by the Egyptian government towards preserving Egypt's Jewish heritage was the allocation in January by the Ministry of Antiquities of emergency funds to repair the partially-collapsed roof of the Eliyahu Hanavi Synagogue in Alexandria. The Nebi Daniel Association delegates visited the synagogue, the largest in the Middle East, and confirm that the repairs are due to start soon. The building will still need some overall and extensive restoration and the Nebi Daniel Association will fund a needs assessment study as the basis for raising the funds to undertake the restoration. In the meantime, an application to have the synagogue listed as part of the World Monument Fund has been submitted.

A survey by the Ministry of Antiquities of the three Jewish cemeteries in Alexandria is identifying mausoleums to add to their list of protected antiquities. This will afford the cemeteries additional overall protection.

More about Nebi Daniel
Posted by bataween at Monday, May 15, 2017