Scary words from a Yemeni minister: the country's last 40 Jews are viewed as an enemy to be 'ethnically cleansed.' The Times of Israel quotes an Israel Radio report (with thanks: Lily): 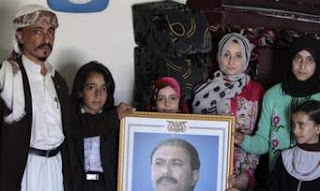 Yemen’s information minister said his government is unaware of the fate of the country’s few dozen remaining Jews, most of whom reside in the Houthi rebel group-controlled capital of Sana’a, Israel Radio reported.

Speaking to an Israel Radio reporter on the sidelines of a conference on the civil war in Yemen in Paris, Moammer al-Iryani also said Saturday that the Houthis view the tiny remaining Jewish population as an enemy and are engaged in a campaign of ethnic cleansing that includes ridding Yemen of its Jewish community.

Approximately 50 Jews are believed to remain in Yemen, 40 of them living in Sana’a in a compound adjacent to the American Embassy. Despite the ongoing civil war, they have refused to leave the country.

The Iranian-backed Houthis, who took control of large parts of the country in an offensive beginning in 2015 alongside forces loyal to former president Ali Abdullah Saleh, have long incited against Jews and Israel. The group’s slogan is: “Death to America. Death to Israel. Curse upon the Jews. Victory to Islam. Allahu Akbar.”

Article on the barely publicized in France defenestration of a Jewish woman in Paris by a Muslim. Causeur website charges that since the ad-Durah affair, French elite/"leftist"/media/ opinion has denied to Jews the status of being victims. They simply cannot be considered victims. The author that according to certain prejudices of the "intellectual elite" prevent them from seeing Jews as victims, just as the Jews expelled from Arab lands cannot be perceived as victims.
http://jforum.fr/letrange-silence-autour-de-la-mort-de-lucie-halimi.html