Recapturing Judeo-Arabic before it dies out 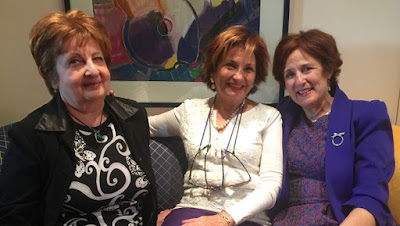 Public Radio International took a break from covering Donald Trump in order to do a report on Judeo-Arabic. In Montreal, they tracked down Elsie Solomon, Lisette Shashoua and Gladys Kattan, three Iraq-born women who still speak the language. Regrettably we don't hear much of the dialect in this report: we get more of the historical context. One thing is sure: This language, while experiencing a mini-revival, is on its way to extinction.

Judeo-Arabic is more than a dialect. New York University Hebrew and Judaic studies professor Benjamin Hary calls it a "religiolect."

But as a natural language, it's dying.

With so few Jews left in Arab countries, it is barely spoken — especially among the young.

There is, though, renewed interest in Judeo-Arabic as a cultural artifact. In 2013, an Israeli feature film about the exodus of Jews from Iraq included mainly Judeo-Arabic dialogue. And there are attempts to capture and document the language before it dies out.

All of which makes the three women Alina spoke with happy that their native tongue won't entirely vanish.

Read article in full : (the radio report is embedded)
Posted by bataween at Saturday, March 18, 2017

"Recapturing the Judeo-Arabic dialects before they die out" would be better.

I am all for it. There are a lot of works in those languages still waiting to be translated.

Is anyone doing this with Judaeo-Persian and its variations? I don't know how much Judaeo-Persian has remained spoken, but given its influence on the Babylonian Talmud and some medieval Jewish poetry in Iran, it deserves a place of its own.

ucla has a prof of judeopersian and there is at least one text by
“Judeo-Persian Literature,” in Houman Sarshar, Esther's Children: A ...
Happy No-ruz (Teharangeles dialect!)

From Eli Timan
I have been recording and documenting Jewish Iraqi dialect for the past 10 years. A lot more work is needed. However there is an archive at SOAS, university of London called ELAR which contains many of my recordings with translation. However it is a bit difficult to navigate so I started uploading some of my recordings on a sound website called www.soundcloud.com if you search 'eli timan' you will see the 30 odd tracks already uploaded.
There will be many more, so please spread the word.

I have always wondered how it is that Ashkenazi Jews only renewed speaking Hebrew mainly through the efforts of Eliezer Ben-Yehudah and Aliyah & the State of Israel, whereas Mizrachi Jews seem to have always spoken Hebrew in the home in the Galut apparently since the beginning of the exile at 70CE. Is this correct ?