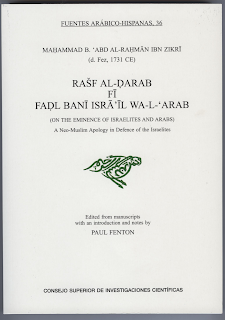 Thousands of Jews are known to have converted to Islam under the 13th century fundamentalist rule of the Almohads and Almoravids in Spain and North Africa, but not much of their literary work survives.  Now Professor Paul Fenton of the Sorbonne has brought to light a rare document by the Muslim convert from Judaism Ibn Zikri. An annotated Arabic edition of Ibn Zikri's Rashf al-darab fi fadl bani Isra'il wal-'arab (0n the Eminence of Israelites and Arabs) was published by CSIC, Madrid, in 2016.

This book opens up a whole new area of religious studies for it it is the first ever publication of a polemical work by a neo-Muslim of Jewish descent in defence of Israelite ethnicity.

Here is an extract from Professor Fenton's Introduction in English:

"The present publication of Muhammad Ibn Zikri's Rasf al-darab represents the first appearance of a unique apologetic work emanating from the ranks of the Jewish Marranos, known as Muhajirun, or emigres. Of the several crypto-Jewish communities that existed in Islamic lands, none, as far as I know, produced any substantial literary works reflecting their situation within the Muslim-Jewish convivencia. Despite their longstanding conversion to Islam, generally by force, the descendants of the Moroccan Marranos, often known as bildiyyin or bled, continued over the centuries to constitute a distinct section of Maghrebi society whose destiny was often to be dismal. Indeed bias against them festered among certain sections of the Moroccan aristocracy. Retrieved from the dust of oblivion, Ibn Zikri's work opens a new chapter in the history of inter-religious polemics and constitutes the most explicit defence of Jewish ethnicity in the arena of the medieval debate about ethnic superiority known as su'ubiyya."

The curious case of the Moroccan Marranos
Posted by bataween at Tuesday, March 21, 2017