A Syrian refugee in Aleppo called Razan who claims she is Jewish has appealed to Israel for help. But Jews usually keep their identity under wraps, and the Jewish Agency has its doubts , according to the Times of Israel. (With thanks: Lily) 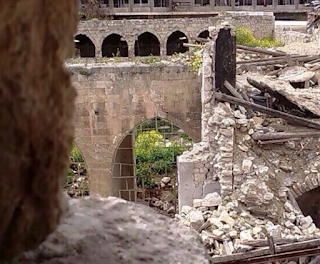 The Central Synagogue of Aleppo in January 2016. (Courtesy/Moti Kahana)

Razan’s younger brother Salah, who gave Army Radio the recording and now lives in London after fleeing Aleppo over a year and a half ago by way of Turkey, said that his father is Muslim and his mother Jewish, and that he and his two sisters have always considered themselves to be Jews.

“When I was a child my mother told me I am a Jew and I understand that. And before the war I told everyone, everyone knows I am a Jewish, all the neighbors around me. After the war, I couldn’t say that, because it is very difficult,” he said.
Despite the family’s appeals for help from Israel, officials at the Jewish Agency, which has carried out a number of operations extracting Jews from hostile countries, told Army Radio that they had doubts about the family’s Jewishness.

People in similar positions have in the past ensured that their Jewish identities remained under wraps as to avoid magnifying the danger they face.

Israel has not taken in any refugees from the Syrian civil war and a plan to bring in 100 orphans has recently stalled.

Elizabeth Tzurkov, who researches Syria at the Israeli think tank Forum for Regional Thinking, told Army Radio that she was aware of similar cases to that of the woman in the recording and questioned the source of the Jewish Agency’s skepticism.

Read article in full
Posted by bataween at Tuesday, March 07, 2017