Is Iran really safe for Jews? 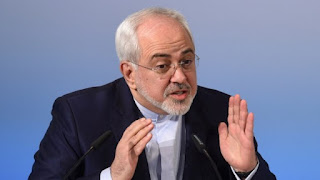 Iranian Foreign Minister Mohammed Javad Zarif has accused Prime Minister Benjamin Netanyahu of distorting history by repeatedly saying that modern Iran, like ancient Persia, is bent on annihilating the Jewish people. How could that be so, he claims, when Persia 'saved' the Jews on several occasions? Michael Rubin asks if Iran really respects Jews in Commentary (with thanks: Lily):

Zarif’s rebuke of Netanyahu was enough to win applause in some circles, but those who buy into the myth of an Iranian haven for Jews should think again.

Take the modern day. How often have pundits talked about the Islamic Republic’s supposed tolerance for Jews by citing the fact that Iran’s parliament has a Jewish representative or that Iran is home to perhaps 20,000 Jews, supposedly the second-greatest Jewish population in the Middle East besides Israel?

Let’s put aside the fact that no one knows just how many Jews are in Iran today. The 20,000 figure has been bandied about since the 1990s, even though many Jews continue to leave Iran for Israel or the United States. And also put aside the fact that the “second largest community” doesn’t mean anything when the difference between the first and the second are several orders of magnitude. It is akin to saying Finland is the second-largest destination for sun-and-surf beach vacations if the only other choice in the survey is Jamaica. What matters is that, under the regime that Zarif represents, Iran has lost at least 80 percent of its Jewish population. That’s generally not a sign that Iran is a welcoming and healthy place for Jews to thrive or even live.

Praise for having a Jewish representative in parliament is just as misplaced. When I attended synagogue as a student in Iran, members of the Jewish community did not trust the representative. His sole purpose seemed to be to pass pronouncements from the government to the synagogues and to be cited to deflect attention from Iran’s fairly horrendous human rights record.

Beyond that, though, is Iran safe for Jews? It depends. Pogroms—as vicious as any in Eastern Europe—characterized nineteenth century Iran. Then there were the restrictive rules: In 1889, for example, the government prohibited Jews in Isfahan from going outside on wet days lest rainwater spread their impurity. Jews were also forbidden from touching food, speaking loudly, or purchasing any goods in the market. (Daniel Tsadik provides an excellent account of modern Jewish history in his 2007 book, Between Foreigners and Shi‘is; Habib Levy’s Comprehensive History of the Jews of Iran remains a masterpiece).

It is true that, at times, Iran was a relative haven for the Jews. The irony here, though, is that it was the regime that Zarif represents not only overthrew an Iranian state that allowed its Jewish minority to thrive, but also sought to close the door on the laudable regimes of the distant past.

Read article in full
Posted by bataween at Wednesday, March 15, 2017

There remain no more than 9,000 Jews left in Iran. The community is essentially gone. As gone as it is elsewhere in the Maghreb and Mizrahi world.