How many Jews died in the Farhud?

It is universally accepted that the 1941 Farhud pogrom in Iraq was a cataclysmic event which shook the Jewish community of Iraq to its foundations. Controversy still centres, however, over how many Jews were killed.

The Babylonian Jewry Heritage Center in Israel has a list of 145 named victims but  usually quotes an official figure of 179 Jews killed.

The historian Sami Sourani attended a lecture, together with 150 others,  at the Hebrew University by Ezra Haddad, the principal of the Jewish Wataniya school. Haddad was involved in the burial of the Jewish victims by the Hebra Kaddisha (Jewish burial society) in a mass grave in the old Jewish cemetery in Baghdad. He said that the Hebra handled the burial of between 180 and 200. He could not be exact as there were limbs which could not be related to a body.

Sourani says that this number could not have included those Jews who were killed while standing on a bridge over the river Tigris. Their bodies were thrown into the river and washed away.

The Jewish community leaders agreed with the Regent to minimise the death toll, Sourani claims, lest Iraq  be seen as a 'savage' country.

However, when British documents were declassified fifty years later, a researcher from Israel discovered the text of a speech by the British ambassador to a group of visiting British soldiers. "If they had come one day later and the riots had continued, then another one thousand (my emphasis) people would have been killed," he said.

The historian Eli Kedourie estimates that at least 600 Jews were murdered.

The reason why estimates differ so wildly is that whole families could have lost their lives, especially in the poor Jewish quarters of Baghdad, leaving no-one alive to report the deaths. 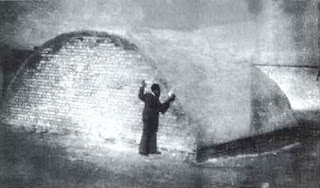 Farhud mass grave in the old Jewish cemetery in Baghdad. The cemetery was razed under the rule of general Qassem.

The Jewish community leadership arranged a communal prayer when the mass grave was built and many Jews went to say kaddish.

According to Sami Sourani, there was a peaceful demonstration by Muslims a few days later. The demonstrators claimed that the Jews had buried a Muslim in that grave and they wanted to open the grave to take his body out.

"They claimed that that Muslim appeared to them, asking them to take him out of the Jewish Cemetery and bury him among Muslims. At this point, the Iraqi Police dispersed this demonstration and it did not happen again."