In this sad profile of the last Jews of Egypt, their leader Magda Haroun expresses her wish for Judaism to be part of a museum of Egyptian civilisations. In 2016, the government listed all Jewish monuments and synagogue collections. Israel National News reports: 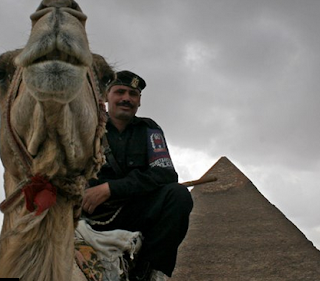 Policeman by the Pyramids (Flash 90)

They had an impact that far exceeded their numbers in trade and even cinema, with actress and singer Leila Murad dominating the silver screen in the 1940s and 1950s.

But the Arab-Israeli war of 1948 led to the disintegration of the community, with many leaving Egypt or being forced out under the regime of president Gamal Abdel Nasser.

Today, the Jews of Egypt are estimated to number 18, with 12 of them in the coastal city of Alexandria.

Magda Haroun's dream is for Jewish artifacts to be seen by the public, perhaps in a planned museum of Egyptian civilization.

Officially, the government now makes no distinction between Pharaonic, Islamic, Coptic and Jewish heritage, and the antiquities ministry has come up with the funds to fix the roof of Alexandria's synagogue.

"The (antiquities) minister promised me that a museum of civilizations will open, representing all the civilizations of Egypt," said Magda Haroun.

The Egyptian civilization museum partially opened in February with a small exhibition but there are no definite plans as yet for displaying Jewish artifacts in it.

However the minister, Khaled el-Enany, told AFP that in early 2016 he set up a committee to list "all the Jewish monuments and Jewish collections that are in the synagogues."

But on a public level, many Egyptians still have a mixed view of their Jewish compatriots.

"It remains a complicated question," says Amir Ramses, who made a 2013 documentary, "The Jews of Egypt," on the community's history.
"Mentioning the Jews in Egypt was a taboo," he said.

Read article in full
Posted by bataween at Sunday, March 26, 2017