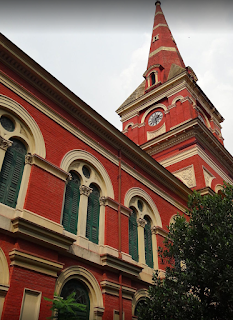 The Maghen David synagogue in Calcutta

There is just under a month left to listen to Ben Judah's family story on BBC Radio 4. It's a Jewish story with a difference, lyrically told; sad, yet offering some hope.

Ben's ancestors - the Judahs, the Ezras, the Belilios and the Sassooons  - settled in Calcutta from Baghdad, beginning in the 18th century. Today, there is little trace of these great trading families except in sepia-coloured photos and on the gravestones that lie behind a paddy field in the Calcutta Jewish cemetery .

Trading - in jute, spices, opium - ran in the Judahs' blood. They were part of the Baghdadi community, who 'spoke Arabic, prayed in Hebrew, and longed to be English'. Calcutta was the jewel in a necklace of bustling ports established by the British in India and the Far East.

The Calcutta Jewish story, founded by Shalom Cohen from Aleppo,  is almost over, says Ben. From 4,000 Jews, only 20 remain to light a forlorn candle on Friday nights. No rabbi, no weddings, no children, only funerals. Their descendants have moved to Britain, to Israel, to Australia.

So far, so lyrical. Ben goes into romantic overdrive when he claims that Jews felt close to Muslims - 'faiths destined to live together' whether in India or in Israel.

(It is true that Jewish households employed Muslim cooks and trained them in the culinary arts of Baghdad. The reason, according to Mavis Hyman in 'The Jews of the Raj', was not so much 'disgust at pork', but  that high caste Hindus would not  cook in non-vegetarian households. On the other hand, Jews could go out to Hindu shops to  purchase vegetarian pastries, in the certain knowledge that these foods met 'kosher' standards.)

Ben Judah's programme does not emphasise enough that the rigidly-stratified communities of India remained hermetically separate. Hyman quotes an Englishman in the early 20th century describing Calcutta as 'a city of gulfs where nobody knew anybody outside their particular sphere.'

But Ben does explain that the British sphere was perhaps the most impenetrable. No Jews were ever admitted to British clubs. He describes how an uncle, wishing to escape the impending strife between Hindus and Muslims in the 1940s, attempted to convert his British subjecthood into citizenship, by arguing that he was of 'European culture': he failed. He was too 'dusky' to cross the colonial barrier.

Unlike Jews who escaped the Holocaust and pogroms of Europe, the Baghdadi Jews who left Calcutta 'arrived and left happily'. The Jews of India had never experienced persecution. (But this does not mean that the 'white' Baghdadi Jews did not discriminate against the 'brown' Bnei Israel, who traced their history back 2,000 years.)

The authorities in Calcutta are busy restoring three synagogues. Ben Judah concludes his programme with the moving and important point that these buildings, though destined to remain silent, will be lasting memorials to a culture now lost in the places where the founders of the Calcutta community came from. The Great Synagogue in Aleppo has been destroyed; the Great Synagogue of Baghdad is inaccessible.

Another important difference:  Jews will continue to be able to visit the graves of their ancestors.

Destiny and the Migrant by Ben Judah, BBC Radio 4 (15 mins)