France continues to be hit by fall-out from the trial of  Georges Bensoussan for 'incitement to hatred': public intellectual Alain Finkielkraut has resigned from LICRA -  one of the groups backing Bensoussan's prosecution for saying that Arab antisemitism 'is imbibed with mother's milk.' But more controversially,  support for the Moroccan-born French-Jewish historian, (author of a seminal work on Jews from Arab countries)  is coming from sections of the French far right. Cana'n Lipschitz reports in the Times of Israel (with thanks: Lily): 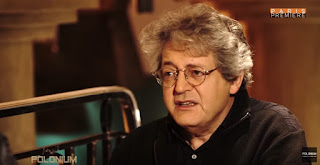 Discontent over Bensoussan’s prosecution spread to more centrist circles, exposing the left-leaning LICRA to criticism by Finkielkraut. Last year he received the country’s ultimate academic distinction when he entered the Academie Francaise pantheon of great thinkers.


On Jan. 29 Finkielkraut, a member of the dovish JCall group of French Jews who oppose Israel’s settlement policy, announced he would be resigning from LICRA over its decision to sue Bensoussan.
The move “dishonored” LICRA, he said during an interview with RCJ radio, accusing LICRA of “opting for inquisition” against Bensoussan.
“I call on all activists, followers and sympathizers to draw their own conclusions [about LICRA] from this ignominy,” he said. Finkielkraut called the prosecution of Bensoussan “an exceptionally grave event politically, judicially and historically.”
During the interview, Finkielkraut noted that Bensoussan in 2015 was paraphrasing the statements of the Algeria-born sociologist Smaïn Laacher, a non-Jew who said that anti-Semitism in Muslim areas is “in the air that one breathes.”
Laacher and Bensoussan were using metaphors, Finkielkraut argued, and neither “speak of any biological dimension to the culturally transmitted phenomenon they describe.” That refutes the “incitement to racial hatred” charge, he said.
But in an election year with the far-right National Front group leading in the polls, this technicality was soon eclipsed in the media by the trial’s broader implications on free speech and race relations.
The trial “is a way of avoiding investigative thought and any public expression on Islam except for praise,” Finkielkraut said in the RCJ interview.
In a scathing op-ed in the Marianne weekly, columnist Martine Gozlan called the trial “shameful” and an attempt to “silence free thought.”
It’s a recurring accusation by advocates of several French thinkers, Jews and others, who have paid a personal and public price recently for speaking out against Islam or in defense of Israel.
The list includes Michel Houellebecq, who has received death threats for writing a novel critical of political Islam; Bernard-Henri Levy, who is reviled by many members of his left-wing circles for defending Israel, and Finkilkraut himself, who was violently ejected from a public gathering recently because he is a “Zionist.”
Gozlan also noted that LICRA’s fellow plaintiff, the Collective Against Islamophobia, has been accused — including by LICRA itself — of propagating anti-Semitic disinformation against Prime Minister Manuel Valls, whose wife is Jewish.
On Feb. 2 Philippe Karsenty, the French Jewish activist and deputy mayor of the Paris suburb of Neuilly-sur-Seine, echoed Gozlan’s sentiment in an op-ed he wrote with lawyer Pierre Lurçat.
“How could a group established to defend Jews come to assist a judicial jihad waged against a Jewish intellectual specialized in the history of the Holocaust?” they asked.
It was a withering attack on LICRA, a group founded by a Jewish journalist in 1926 in an effort to defend a Jew charged with the Paris killing of a Ukrainian nationalist. The Ukrainian was responsible for pogroms in Ukraine in which the Jewish killer’s relatives perished.
Amid growing criticism, the head of LICRA, Alain Jacubowicz, who is Jewish, broke his silence about the affair. In an op-ed published earlier this month, he accused Bensoussan of “benefiting extremists” with his statement on Islam.
Jacubowicz had a point.
Bruno Gollnisch, a Holocaust denier and European Parliament lawmaker for National Front, embraced Bensoussan’s cause. In a Jan. 25 op-ed published on his website, Gollnisch equated Bensoussan’s troubles to those of Jean-Marie Le Pen, who was sidelined as the National Front’s leader after multiple convictions for hate speech against Jews and Muslims.
“There are truths we’re forbidden to speak,” Gollnisch wrote about both men.
Bensoussan in turn broke his own silence on the affair and replied to Jacubowicz in an open letter published Monday.
Turning Jacubowicz’s claim against him, Bensoussan wrote that the popularity of a populist, anti-immigrant party like the National Front is being fueled by “a denial of reality, a suicidal strategy of blindness and silence.”

Freedom of thought goes on trial in France by Lyn Julius

The French Inquisition by Yves Mamou

Is the Shoah memorial home to a racist? by Marc Weitzmann
Posted by bataween at Monday, February 20, 2017