Update: The US Embassy in Tel Aviv has clarified that President Donald Trump’s travel ban will largely not affect the tens of thousands of Israeli Jews born in Middle Eastern countries. (Most fled persecution and are over 65).

A statement today said the controversial executive order would not be enforced against Israelis from those countries unless they possess a valid passport from one of the seven Arab countries banned under the directive.
See Times of Israel report.

The 90-day immigration ban from seven Muslim countries has already been having an effect on Jews born in those countries, although President Trump has said that Christian refugees will be given priority for entry to the US and Green Cardholders will no longer be affected.  Here is an unintended consequence of the ban - on a programme originally established in Austria to help refugees from religious persecution in Iran. NBC New York reports:  (with thanks: Michelle) 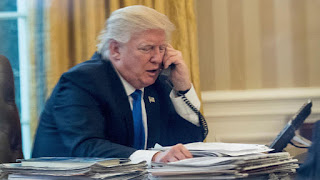 President Trump in the Oval Office

Austria has shut its door to about 300 non-Muslim Iranians hoping to use the country as a way station before establishing new homes in the United States, The Associated Press has learned. The action is an early ripple effect of U.S. President Donald Trump's effort to clamp down on refugee admissions.

Under a 27-year-old program originally approved by Congress to help Jews in the former Soviet Union, Austria had been serving until recently as a conduit for Iranian Jews, Christians and Baha'i, who were at risk in their home country and eligible to resettle in the United States. Iran has banned the Baha'i religion, which was founded in 1844 by a Persian nobleman considered a prophet by followers.
Read article in full
Posted by bataween at Tuesday, January 31, 2017

dhs exception for US residents, depending on documents they present:
https://www.nafsa.org/Professional_Resources/Browse_by_Interest/International_Students_and_Scholars/Travel_Advisory_for_Nationals_of_Certain_Countries_Pursuant_to_Executive_Order/
--malca

So, it's not really a Muslim ban, then?