Tales from Baghdad: the governor, the rabbi and the baby 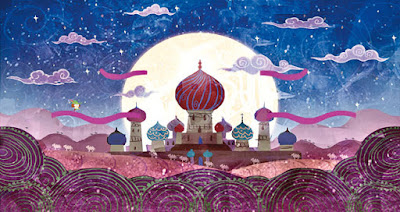 Sami Sourani is a historian of the Jews of Iraq living in Canada. When he was a child he used to listen to his grandfather's fireside stories. In the first of an occasional series, here is a story from the time when Babylon was under Persian rule.

"I heard this story from my late grandfather (the late Moshe Shalom Jiji). As I remember, after finishing supper during the very cold winter nights in Baghdad, the family used to sit around a charcoal stove in the living room. We used to burn in the stove some orange peels to fill the room with a nice aroma.

At the same time, we also used to roast a few chestnuts. It was a nice family environment, but more importantly, we sat down near Grandpa to hear his stories.

The following story that he told was when Babylon was a Persian colony. Persia used to appoint a governor whose main duty was to collect taxes and to execute the Shah's orders. One governor tried to increase taxes in a way that the taxpayers would blame themselves. To do so, the governor used to invite the Rabbi of the community to his court and ask him a question. If the Rabbi could prove that the governor was wrong, then there would be no increase in taxes. If not, then the governor had the justification to increase taxes as he wished.

The question that the governor asked the Rabbi was,"Can a baby learn to talk without the help of his mother?" The Rabbi answered "NO". The governor suggested to the Rabbi that he keep a newborn Jewish infant in his palace. His mother would be allowed to breastfeed her/ him as needed. However, she would be watched to ensure she did not talk to her baby at all.

The Rabbi took a walk in an area where a considerable number of Jewish families were living. While walking aimlessly, he heard the screams of a woman who was giving birth. He knocked on the door and he explained to the family about his mission and the orders of the governor. The family of this baby had no other choice but to agree.

The Rabbi, the mother and her infant went to the court of the governor. The mother agreed to the conditions imposed upon her. This process continued for at least three years. The mother, despite what she was told not to talk to her infant, tried sometimes to whisper in his ear,"Why did you come to this cruel world?" The governor, one day, decided to find what was going on. He called the Rabbi to his court and asked his servant to bring the baby. The governor questioned the baby," What is your name? What is your father's name ?" and other questions. The baby looked confused and did no know what to say.

The governor ordered his servant to take the baby away. When the servant went to carry the baby, his lips were near the baby's ear. At this moment, the baby said in a loud voice,"Why did you come to this cruel world?" This sentence of seven words was enough proof that mothers help their babies to talk. It saved the Jews from higher taxes, for a while.


The moral of the story is that the laws of nature cannot be bent, whether or not the orders come from a ruthless governor."

How Baghdad got its Jewish cemetery
Posted by bataween at Wednesday, January 04, 2017

Email ThisBlogThis!Share to TwitterShare to FacebookShare to Pinterest
Labels: Dhimmitude, Jews of Iraq