Sudanese Jews look back with nostalgia

Almost nothing is left today of the Jewish community of Sudan. It was the smallest in the Arab world, composed mainly of recent arrivals from  the Ottoman empire and under British control, but 'blowback'  from the Arab-Israeli conflict in the 1960s drove it to extinction. What this AP article, reprinted in the Times of Israel, does not say is that the original 19th Jewish community was forced to convert to Islam by the fundamentalist El-Mahdi.  Nasserist decolonisation in the 1960s also forced Jews to flee. (With thanks: Lily)

AP — Lily Ben-David gets emotional when she talks about her childhood in Sudan. She still dreams of her school, the courtyard, the balcony and frolicking on the banks of the Blue Nile, even though it has been more than 50 years since she saw any of it. 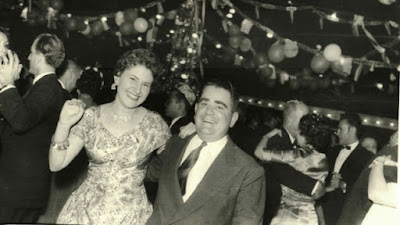 A New Years' Eve party in Khartoum (Photo: F. Eleini)
Sudan’s Jews once made up the smallest Jewish community in the Middle East, a close-knit group of 1,000 people who enjoyed warm relations with their Muslim neighbors. But the establishment of Israel in 1948, followed by a series of Arab-Israeli wars, forced them to flee in the 1960s. Although Israel and Sudan are now bitter enemies, the remnants of that community retain fond memories of the northeast African country.

“If I could get a ticket under an assumed name, I will go, honestly,” the 71-year-old Ben-David, who left Sudan in 1964 and now lives outside Tel Aviv, said with a chuckle.

The history of Sudanese Jews has been largely unknown, even among world Jewry, until now.

Over the last year, Daisy Abboudi, a British researcher and granddaughter of Sudanese Jews, has been working to record the stories of her forefathers. Adding to very few works on Sudanese Jews, she started the website Tales of Jewish Sudan, where she posts extracts of interviews with living members of the community.

I went to youth group events with Daisy Abboudi and when she mentioned where her family was from, it was of interest to me as I'd never heard of the community in Sudan before. I'll be checking out the site