Once sidelined, Mizrahi music is mainstream

The Guardian discovers the burgeoning scene of 'Mizrahi' music in Israel, even though most of the instruments used are European and what is being described is a synthesis of old and new. Although this type of culture now has the official stamp of approval of government ministers like Miri Regev,  Peter Beaumont  claims that  Mizrahim suffered a double disconnect - from the Arab world and from mainstream Israeli culture. (With thanks: Linda) 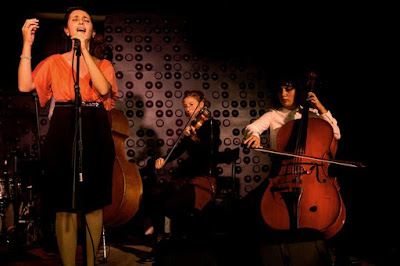 On a small stage in the basement of a Jerusalem bar, singer Inbal Djamchid pauses during her performance to describe the inspiration for the next song to be played by her group, Ecoute.

She explains that it describes a lyricist’s unrequited love for one of Egypt’s most famous singers, Umm Kulthum, revered in the Arab world.

When the music starts, the song is haunting and unfamiliar, but while Djamchid’s voice echoes the melodies of Algerian, Moroccan and Egyptian music, the lyrics are sung in Hebrew.

Djamchid and her husband Gilad Vaknin, who plays electric guitar in the group, are third-generation Mizrahi Jews, whose families came to Israel not from Europe but from the Middle East and north Africa.

Read article in full
Posted by bataween at Wednesday, January 18, 2017