This interesting article by the academic Mohamed Chtatou in African Exponent extolls the myth of harmonious coexistence between Amazighen (Berbers) and Jews before the much-regretted mass Jewish exodus from Morocco. For Chtatou, an Amazigh, the villains of the piece are Moroccan nationalists, Zionists and the French colonial power.  While vaunting the role of Jews in finance and trade, Chtatou does not say that the Berber lands were not fully controlled by the Moroccan king until well into the 20th century. Jews who joined the Berber tribes in the Atlas mountains were always subordinate and their situation sometimes precarious. (With thanks: American Sephardi Federation.) 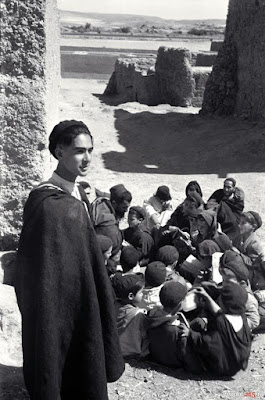 
Moroccan Jews were very good entrepreneurs, created businesses everywhere and provided jobs to their Muslim brethren. They set up the first Moroccan banking system from small shops in the Medina, and made loans to trustworthy people without guarantees, so trade flourished and with it employment and wealth. Imperial cities became trade centers and with them coastal cities like Tangier and Agadir. The Alouite Sultan Mohammed III, who reigned from 1757 to 1790, encouraged by the success of Jewish business and trade, created a new coastal city he called Mogador (Essaouira, today) and entrusted the Jews with the conduct of international trade from its port by ships.


Muslims and Jews lived in harmony: Inland cities, on the other hand, got involved in caravan trade, chief among them was Sefrou, situated 30 kilometers south of the capital Fes and which had a high concentration of Jews and was known as: “Little Jerusalem.” In the city there were two kinds of Jews: the “Sitting Jew,” a banker who financed the caravan trade and the “Walking Jew,” a caravan leader and guide known in Amazigh language as: azettat.


Azettat is an Amazigh Jew, trusted by the Amazigh tribes. His caravan travelled through their territories unmolested. He is traditionally, at the head of the caravan carrying a long cane at the top end of which he flies the woven colors of the tribe and which he will, duly, change in the territory of the next tribe. The caravans started in the Middle Atlas and went south through the Sahara desert to Mali's Timbuktu, where salt was exchanged against the Ashanti gold or ivory, gems, etc. The trip lasted forty days each way.

In the Amazigh hinterland, sometimes Jews and Muslims lived in the same house, shared food and celebrated together their religious feasts, in a rare show of tribal solidarity and religious tolerance.

However, distrust between Jews and Muslims was intimated by the Istiqlal party, on its founding in 1944, on a pan-Arab platform. One of its founders Balafrej, even sojourned, several times, in Nazi Berlin at the invitation of the Third Reich.
During the Second World War, King Mohammed V, denied the Nazi French government the possibility of the internment of Moroccan Jews in camps on the ground that the entire Moroccan population is Jewish, deep down, by solidarity and, therefore, should all be interned.

The nationalists of the Istiqlal, on the independence of Israel and the, thereafter, occurrence of the Nakba, circulated posters asking Muslims to boycott Jewish business and trade. On the eve of the independence of Morocco, the French colonial power incited the very rich Jewish families to leave to France on the ground that Muslims could encourage pogroms. Of course none of this happened.

However, from 1956 to 1965 the Jewish Agency and other international organization sent agents all over Morocco inciting Moroccan Jews to leave for Israel, where they will enjoy everlasting security and creature comforts. And following the Six-day war of 1967, many left and as such, in less than twenty years the population decreased from 250,000 to 6,000. Today there are 3,000 left in the big cities such as Rabat, Casablanca, Fes, Marrakesh and Agadir.

Nevertheless, the tradition of Jewish financial advisors is maintained in today’s Morocco: André Azoulay is the current king's advisor on financial matters.


Regrets: Today, the Amazigh and the Arabs likewise regret the departure of Moroccan Jews bitterly for emotional and practical reasons.

In the city of Sefrou, there is a grotto in the hill at the entrance of the city called kaf al-moumen “the cave of the faithful,” a site where, both Muslims and Jews, believe that their saints are buried inside. Prior to the departure of the Jews, Muslims used the cave for prayers from January to June and the Jews from July to December. Today these periods are still respected, in spite of the departure of the Jews. The inhabitants believe that the Jews will come back and business will pick up anew. They say their departure was a big mistake for which both sides are responsible. As for the government, it has recently embarked on a nationwide program of refurbishing and revamping of Jewish schools, synagogues, tribunals, cemeteries, etc. and has, also, signed an agreement with a European shoah institution to recuperate archives on the Moroccan Jewish heritage.

Read article in full
Posted by bataween at Sunday, January 22, 2017

Email ThisBlogThis!Share to TwitterShare to FacebookShare to Pinterest
Labels: Jews of Morocco, Jews/Berbers