Opposition to the campaign by minister Gila Gamliel to document the stories of 850,000 Jews expelled from Arab lands came from an unlikely quarter yesterday:the mayor of the Israeli town of Ness Ziona. That Yossi Shabo's family came to Israel 67 years ago because they were Zionists is not in question. More worrying, is that Shabo showed his ignorance of the 'push factors' his family suffered in their native Egypt. Yediot Aharonot reports: 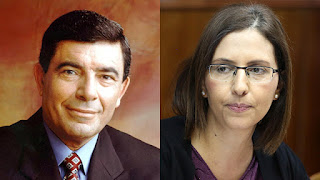 The Mayor of Ness Ziona, Yossi Shabo, today (Wednesday) came out against the flagship project of Minister Gila Gamliel to document the heritage of Jewish communities in Arab countries and Iran, claiming: "Arab countries did not expel us, we  came voluntarily."


Recently the Minister for Social Equality has been running a campaign on the expulsion of Jews from Arab countries. It aims to point out the injustice directed against the Jews in their home countries. But the mayor, a member of the Likud Central Committee who immigrated to Israel from Egypt 67 years ago, the issue is not yet settled. In a letter sent to Gamliel, protesting the campaign, he called it "insulting". According to him, it "implies that Jews from Arab countries wanted to live in exile in their own countries, and only expulsion brought them to immigrate to Israel. I strongly protest this distortion of history."
When his family emigrated to Israel, his father paid for them to travel to Europe and from there they arrived in Israel.

"A little effort on your part would clarify that the State of Israel through its agents paid a lot of money to the leaders of the Arab countries to allow the immigration of Jews to Israel. The immigration of Moroccan Jews was only made possible thanks to the involvement of the Mossad and the Jewish Agency. In light of this, I ask whence came the theory of expulsion? "
Shabo ended his letter demanding:"in the name of my family and like all Jews from Arab lands, I challenge you to correct the mistake, stop the campaign and announce publicly that Jews in Arab countries left  out of Zionist motives and were not expelled."
The national plan for documenting the heritage of Jewish communities in the Arab countries and Iran has been approved by the government at a cost of 10 million shekels. The joint venture will be run by the Government Press Office, together with the Ministry for Social Equality led by Gamliel. They will collect  testimonies from the public. A memorial day to mark the departure and expulsion of Jews from the Arab lands and Iran has been commemorated in Israel since 2014.
The Ministry for Social Equality commented: " The Law for a Day to mark the departure and expulsion of Jews from Arab countries and Iran was passed back in 2014, while the office  responsible for its implementation is the Ministry for Social Equality. But there is no contradiction that all who immigrated to Israel from Arab countries and Iran, between those who were driven out  and those who came to Israel from Zionism and by virtue of being  Jews.

Zamir added: "with all due respect, I know  Ness Ziona elected the mayor and is proud of it, but  the story does not represent all Jews of Egypt, let alone a million Jews from Arab countries and Iran. I do not understand how he came out against minister Gamliel. She is the first minister in Israel's history who decided to enact the Memorial Day Law, and to take action to correct the ignorance regarding the story of the Mizrahi Jews. "