The Jewish quarter in Marrakesh will have its original name restored on the orders of King Mohammed VI,  Arutz Sheva reports (with thanks Michelle) . 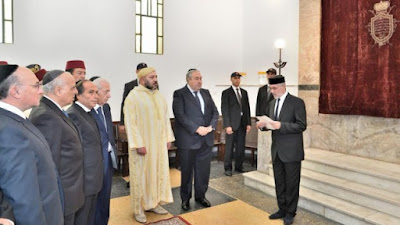 
The Essalam neighborhood will be renamed El Mellah, and the original names of the streets and town squares also will be restored, according to reports.
The order comes from the king following a request by the president of the Jewish community, according to the Moroccan State Press Agency.

The Moroccan Interior Ministry made the announcement on Friday, saying the king made the decision in order to “safeguard the civilizational heritage of the Kingdom as well as the cultural heritage of all the components of Moroccan society.”

Variations of the word “mellah” in Arabic and Hebrew mean “salt.” The Jewish neighborhood was surrounded by a high wall.

Earlier last month, the king attended the rededication of the Ettedgui Synagogue in Casablanca, whose restoration was funded in part by a government grant.

Read article in full
Posted by bataween at Thursday, January 05, 2017

Oooh, That`s soo-sooo nice of the King of Morocco to restore the present name of the Jewish quarter of Marrakesh back to the original...~Marrakesh Mellah~. Would the King and whatever passes for a government in that place ever consider making some kind of reparations for dispossessing nearly one third of a million Jews{Who were there more than 1200 years before Islam turned up}of everything they owned & earned ? Keep in mind that just like any other typical Islamic entity,THEY probably would have exterminated the far more productive Jews of Morocco,Armenian genocide style,if Israel had not defeated the typical war of extermination launched against her by neighbouring Muslim hordes in 1948.Is any body surprised that Morrocans are star performers of the negative,even among the Muslim émigré communities of Europe: At or near the top of their host societies` social morbidity charts in almost every category of psychotic & economic dysfunction ? Including some that were hitherto,not even imagined ?
The world Jewish community has every right to include the Morrocan diaspora as fair game in a war WE never chose; Let alone persisted in to this day.

Let`s stop patting THEM on their heads for even the slightest imitation of civilized behaviour. THEY haven`t stopped being what THEY really are.